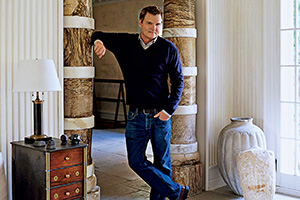 "The home tells the story of the person who's living there," he says.

And he should know.

Sills has designed homes for Tina Turner and major hotels and he has been frequently named to Architectural Digest's list of 100 Top Interior Designers in the United States. The highlights of the New York City-based designer's career can be found in his book Decoration, released last year.

Sills, who grew up in Durant, Okla., always wanted to pursue a career as a painter and an artist and he chose UNT for its strong interior design program. He says Ray Gough, professor of interior design, was a wonderful teacher with his modernist approach.

"Most of the teachers were so good," he says. "I really enjoyed the campus."

But Sills was eager to get out of Texas and Oklahoma. After college, he traveled to Europe -- a gift from his parents if he graduated in three years.

After he returned to the United States, he ran a firm in Dallas, and soon made his mark in the interior design world, with one of his client's homes landing a spread in House and Garden magazine.

"I was always instinctually creating my vision for New York and determining what I wanted to project and achieve," he says. "It was a different mode than New York design training and that perspective gave me an edge on the design industry."

Sills doesn't identify with a particular type of style.

"A thoughtful juxtaposition of colors and textures with classical furnishings can be more original than the kind of shock tactics that strip a room of its soul," he says. "If you look at the past with a fresh but well-educated eye, it clarifies your sense of the present.  I am fortunate to live with beautiful pieces of furniture and objects, which all have a certain story and meaning for me."

Sills recently had holiday dinner with Martha Stewart and attended the wedding of Turner -- for whom he has designed her home in the south of France and restored her childhood schoolhouse in Tennessee.

He sees the perfect space as the representation of those who live there. And he says most of his clients have strong personalities and he loves collaborating with them.

But what if the clients are not interesting?

"A couple of times I had to invent the personalities," he says. "That can be fun, too -- draw out of them who you think they are."

For his book Decoration, he got to show his vision with different aspects and stories of his clients' lives.

"It tells my sensibility as a designer," he says. "To see that in reality and graphically means something to me as an artist. It's a very creative process to do a great book."