Growing up, the six children of Rudy Guerra Sr. and his wife, Carmen, learned the importance of dedication, hard work and education from watching their parents build a family-owned business. The company that started in a small space in Dallas now has a global reach from its more than 200,000-square-foot headquarters in Carrollton. Rudy's Tortillas supplies 40 states and 12 countries with its products, used in such chains as On the Border, Chuy's and Abuelo's.

But at its beginning in 1945, it was a small tortilla factory in Dallas owned by Jose Guerra, who sold it to his son Rudy Guerra Sr. and daughter-in-law Carmen in 1964. 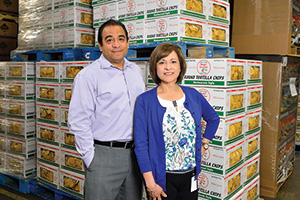 "It was an opportunity to provide a better education for the kids," Kathy Purser ('81) says of her father's decision to buy the company. "He told us, 'Don't come back in the business unless you come back smarter than me.' He didn't want us to come back unless we were really going to contribute."

And so they did. Several of the Guerra family members pursued an education at UNT, where they received the Generations of Excellence award this April for extraordinary service to UNT through the generations. Today, three of Rudy Guerra Sr.'s children -- including Joe Guerra ('96) -- own the company, and Purser serves as the company's controller.

The Guerras' family-owned business is one of many with strong UNT ties, exemplifying the entrepreneurial spirit of the university and its contribution to the economy of Texas and in particular the Dallas-Fort Worth area, home to 237,000 alumni.

The Guerra family was honored with a Generations of Excellence Award

Purser earned her accounting degree at UNT, where she served in Alpha Delta Pi and has fond memories of listening to the One O'Clock Lab Band play in the University Union. After graduation, she worked at a CPA firm and for other businesses, but as the family business grew, it needed a full-time accountant. Nine years ago, she joined Rudy's Tortillas.

"I know my bosses really well, and I respect them," she says of her three brothers who own the company. "It's my nature to put my all into any job, and if I am going to do that, I might as well do that for them. I feel good about it every day."

Joe Guerra, vice president, came to UNT with a goal of making a career at Rudy's Tortillas. Like his siblings, he grew up working in the family's store, selling tortillas, cooking barbacoa, driving the delivery truck -- and learning the importance of each job. At UNT, faculty members taught him skills in classes about cost controls and financial aspects that he could apply to the company.

"I enjoyed it so much, learning and growing up in the business, that I pursued a degree that would help me to continue to grow in that business," says Guerra, who earned a degree in restaurant and hospitality management and now serves on the College of Merchandising, Hospitality and Tourism's Hospitality Board of Governors.

As a member of a family business, he says he loves being able to see his relatives every day and ask about their children and summer vacation plans. But owning a business with family also comes with its challenges, like the times "when one of your siblings gives you a noogie because you're the little brother," he says with a chuckle.

Other Guerra family members also attended UNT and were recognized as part of the Generations of Excellence award. The family proudly gives to the university and established the Rudy's Tortillas Foundation Scholarship in 1996 to support UNT students.

"The university prepared me well," Joe Guerra says. "I'm happy to be able to give back and look forward to being able to participate in the university in any way I can."

The Nguyen sisters built their business when a weekend hobby turned into a full-time job. Several years ago, Van Weaver ('05) searched for a fire truck cake for her son's first birthday and found bakeries charging hundreds of dollars.

"I could bake this myself," she thought. She called her sister Ngoc Nguyen ('10) and said, "We've watched enough Food Network shows to do this."

And they did. After the success of the fire truck cake, Weaver baked a cake for a nephew. Friends saw it and asked her to bake theirs. Soon, she was making more money baking cakes on weekends than she was earning in her full-time job. In 2010, the sisters opened NV Cupcakes, a bakery in Corinth, handling walk-in customers craving cupcakes and baking special-order cakes for baby showers, birthdays and corporate events.

"The business is like studying for an exam," says Nguyen, who earned a degree in biology. "You never know what the outcome will be unless you try hard and work hard every day."

Both sisters had artistic talents and crafty skills they put to work in decorating. But a rehabilitation services degree from the College of Public Affairs and Community Service helped Weaver learn to be resourceful and innovative in running a business, she says.

They've expanded their offerings to include chocolate-dipped treats and a plethora of brittle. Some of their products are available in Denton candy stores and will soon be in Carrollton, Grapevine and Lewisville. The Nguyen sisters opened their new Denton location on Hickory Street in June.

The duo still shows Mean Green pride, entering (and winning) a cake decorating contest at Homecoming in 2011 and earning the Murphy Entrepreneurship award in 2012 from the College of Business' Murphy Center for Entrepreneurship, which helps budding businesses. And after learning the trade through the Food Network, they appeared on the network's Cupcake Wars in 2012. The sisters also have donated more than 20,000 cupcakes to schools and charities in four years.

Bridal showers and weddings make up a big part of their business. More than once, Weaver has answered her phone to hear a crying bride, just hours away from walking down the aisle, who doesn't have any cupcakes for her guests. Something fell through with the original baker. And more than once, Weaver has whipped up 300 cupcakes in three hours, making sure the wedding had a sweet ending. And she has seen brides return for cakes for baby showers, first birthdays and more.

The joy of helping customers -- and working with each other -- keeps the sisters baking.

"Van is my best friend and I am hers, I hope she would say," Nguyen says. "It's a privilege to be working with her." 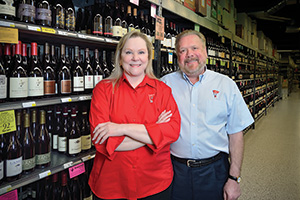 "We learned a lot of the dynamic of the family-owned business by osmosis," Lindy Rydman says.

Spec's began as a 1,000-square-foot store in Houston and has expanded into a chain that now includes more than 3,000 employees in 158 stores across Texas. Spec's introduced wines to the stores in 1974 and added sandwiches, crackers and cheese in the 1980s. The Rydmans' daughter, Lisa Rydman, has joined them in the business, too.

Today, they say they used the skills learned at UNT to orchestrate the success of their growing business.

"I am a conductor even today for a company, trying to dream up this stuff and get everybody to play their part," says John Rydman, who played saxophone as his primary instrument at UNT and planned to become a band director.

Lindy Rydman uses tips from her music education classes in helping train employees. She says that special training and the family feel of the business give Spec's customers a welcoming experience -- and make its employees feel valued.

"I really think the secret to our success is getting people involved, feeling like a part of our family and knowing that the most important thing we do every day is take care of the guest," she says. "We offer old-fashioned 1950s service like you used to get at a gas station when people would come out and clean your windows, check your tires and check under the hood."

UNT and music brought the Rydmans together -- and they have supported both over the years. In 2001, they gave $1 million to UNT through Spec's Charitable Foundation to endow the One O'Clock Lab Band Fund, providing for the annual operations of the Grammy-nominated band and using the excess for jazz scholarships. John Rydman helped arrange for the band to perform with the Houston Symphony and at the Spec's flagship store in downtown Houston in 2010. 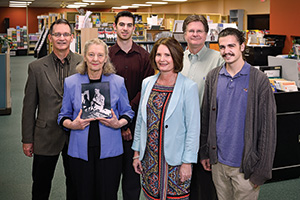 The reputation of the music school and a high school band director's encouragement inspired the young clarinetist Harold Gore ('52) to attend North Texas "on a hope and a prayer," says his son, Richard Gore ('80).

After graduating, Harold Gore became a band director, and in 1967, he purchased Pender's College Store, then a soda shop with art supplies and just a few shelves of sheet music on Mulberry Street. In 1989, Pender's moved to its current spot -- a former furniture store near the Denton square.

"Music changed the entire trajectory of our family," says Richard Gore, president of Pender's Music Co., who has overseen day-to-day operations since 1985. "None of this would have been possible if he hadn't made that decision -- to step out of what he knew and go to North Texas."

Early on, Harold Gore sent a folding order form with a return postage paid envelope to customers. He mailed sheet music, and in return, people sent a check, cash or money order.

"He did it all," says Harold Gore's wife, Betty, who met her husband when he was on a school band tour at Delta State Teachers College in Mississippi when she was a student there. "He was a one-man operation back in the beginning."

Pender's has evolved into a sheet music business with locations in Carrollton, Denton and Oklahoma City, as well as a robust online presence. And the family has expanded into selling and renting musical instruments. Harold's son Ray Gore ('82, '83 M.B.A.) and Ray's wife, Becky Wenzel Gore ('81), opened Music 1st in South­lake in 2008, followed by the opening of another Music 1st in Frisco.

The family business has reached the third generation, too. Ray and Becky's son David Gore, who is in his second semester at UNT, pursuing a degree in radio, television and film, works for the business editing online videos that offer tips for musicians. Richard Gore's son Steven Gore ('10), who studied biology at UNT, manages shipping and receiving at Pender's. In the Gore family, work is a near-constant part of the conversation, they say.

"In small business, you talk business all the time," says Ray Gore, who has a full-time job as a lender at JP Morgan Chase.

Becky Gore agrees: "It's around the clock."

Harold Gore died in 2013, but the family keeps his legacy alive by helping people make music. Pender's was awarded the 2014 Music Industry Award by the Texas Bandmasters Association, which also is honoring Harold for outstanding contributions to music education in the state. And in 2013, the company earned an Obelisk award for arts education through the Business Council for the Arts for its partnership with UNT. Pender's also sponsors an instrument petting zoo hosted by UNT to allow children to learn about instruments.

"Denton is such an incubator for what we do," Richard Gore says. "We would not be in existence without UNT."

UNT's Dining Services delivers some of the best food in the nation for every appetite.