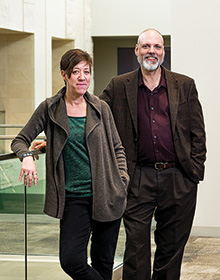 Two faculty members will have a semester off from teaching to concentrate on their own creative projects -- an ambitious composition and a groundbreaking documentary.

The 2016-17 faculty fellows from UNT's Institute for the Advancement of the Arts are Joseph Klein, Distinguished Teaching Professor of composition and chair of composition studies, and Melinda Levin, professor of media arts, director of the Master of Fine Arts program in documentary production and studies, and coordinator of the division of communication media and performance.

Klein will complete a composition that will require about 70 musicians distributed across 24 individual ensembles, each performing its own distinctive music. The work, An Unaware Cosmos, features individual pieces or "modules" composed for one to five instruments each that are played simultaneously so that the music intersects in various ways. He says the piece is conceived as a celebration of humankind's quest for knowledge through skepticism and critical inquiry.

"We strive to make sense of things, often interpreting 'meaning' where none exists," he says. "With regard to music, such preconceived notions limit our perceptions of how time may be structured."

Levin plans to make a documentary media production, Middlesex: 42. °N, 71. °W, and design a web portal focused on a specific place. The portal, called Homing.Device, will allow anyone to pinpoint a particular three-dimensional geographic circumference and embed photographs, video, audio and scientific data about the area.

The subject of the film is Middlesex County, Mass., which encompasses one of the first battles in the American Revolutionary War, Walden Pond, an Air Force base that also is a Superfund federal cleanup site, and dozens of farms.

"The seeds of the American Revolution are right there," Levin says. "The genesis of American transcendentalism is as well. You have a lot of environmental, cultural and political issues there currently. It's just packed in this 3-mile circumference." When this alum dreamed of success, he saw film in his future.
Top