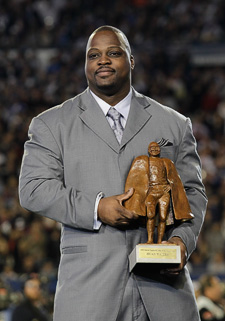 In Brian Waters’ hometown of Waxahachie, Texas, the kids who don’t have much else know they will have sports camps in the summer and new school clothes in the fall. They know Santa will come through for them in the winter and there will be a party in the park in the spring. They know with hard work, they’ll have a chance at college one day. And they know they have the newest Walter Payton NFL Man of the Year to thank.

Waters’ work through the Brian Waters 54 Foundation is evident all over Waxahachie and in northeast Texas’ Sulphur Springs, in Dallas and in Kansas City, where the former UNT football standout is a four-time Pro Bowl guard with the Chiefs. He says winning the league’s only recognition for community service and football excellence — named for the great Chicago Bears running back and philanthropist — is his biggest personal accomplishment so far.

“To be honored in the same breath as Walter Payton — it’s hard to put into words,” says Waters, who received the award before the Super Bowl kickoff and was also a finalist after the 2007 season. “It puts things in perspective. You want people to remember what kind of person you were, on and off the field.”

Raised by his grandmother in Waxahachie, he says it was always a place where people helped each other.

“Sometimes other people needed help, and sometimes we needed help,” he says. “I think it’s just human nature to try to do what you can.”

When Waters came to UNT in 1995, he focused on courses in community service. With the football team, he worked with the Boys and Girls Clubs and volunteered on other projects. He also was a contributor on the field. After three years as a tight end, he played both tight end and defensive end his senior season.

“That was how I could contribute, and I wanted to help the team,” Waters says. “I also wanted to show my versatility, since I had my eye on the pros.”

The versatile Waters went to camp with the Dallas Cowboys as a rookie free agent in 1999, then played briefly in Europe before signing with the Chiefs and moving to the guard position where he would have so much success.

As his resources grew, his plans for helping more people also took shape. His foundation, which he created in 2005, now works with more than 20 agencies. Much of the work helps children and youth in need, and he has awarded more than 80 college scholarships.

“We tell kids if they’re willing to put in the time and effort, they can do anything they want, but then we also give them the opportunity,” he says. “We show them what’s possible.”

Waters is known as much for volunteering his time as his finances to the countless causes he supports. And as the new NFL Man of the Year, he hopes to pass a message along.

“Sometimes people don’t realize how much they can help,” he says. “You just have to have the passion and the want-to. And what’s the reason for having success if you can’t share with others?”

Get to know
Brian

Read a Q&A with Brian Fall marks 50 years since this Mean Green vs. Arkansas tilt.

Hard work and determination propelled these Mean Green student-athletes to the NFL.
Top