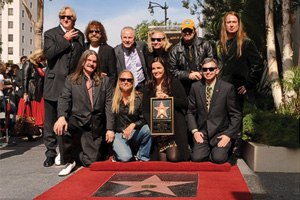 Orbison, whose hits include Oh, Pretty Woman, Crying, In Dreams, Blue Bayou, Only the Lonely and She, was part of The Traveling Wilburys and recorded with artists such as U2, k.d. lang and others.

In 1956, he came to the attention of Sam Phillips of Sun Records — who also gave Elvis Presley his first recording contract ­— thanks to Ooby Dooby, a song written by Dick Penner (’58) and Wade Moore, fellow students at North Texas. Orbison is one of the very few artists to have been accepted by the world in most genres of music and to have won Grammys in pop, rock and roll, and country categories.

Orbison’s star is at 1750 N. Vine St. in front of the historic Capitol Records Building and next to the stars of his great friend John Lennon and Traveling Wilburys brother George Harrison.

Listen to a December 2008 interview with Barbara Orbison on NPR's All Things Considered on the 20th anniversary of Roy Orbison's death.