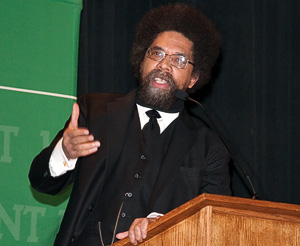 The New York Times has praised West for his “ferocious moral vision.” He burst onto the national scene in 1993 with his bestselling book, Race Matters, an analysis of racism in American democracy. The book has sold more than a half million copies to date. West has published an additional 20 books, including his autobiography, Brother West: Living and Loving out Loud.