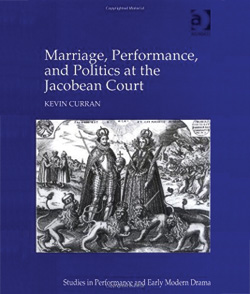 Kevin Curran, assistant professor of English, has produced the first full-length study of Jacobean nuptial performance — spectacular masques and theatrical entertainments performed for high-profile weddings at the English court of James I.

In Marriage, Performance and Politics at the Jacobean Court (Ashgate), part of the “Studies in Performance and Early Modern Drama” series, Curran analyzes all six of the elite weddings celebrated at James’ court for some of the most significant political events of his English reign. The study examines how the performances, scripted by well-known writers such as Ben Jonson and Francis Beaumont, used the idea of union to convey the king’s political and cultural aspirations and promote a new Jacobean form of national identity.