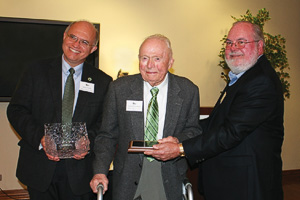 In the mid ’70s, Elmer Kretzschmar (’09 M.Ed.) began pursuing a degree in vocational education from North Texas. He flew through his course work but never completed his dissertation because of family obligations and a relocation. But in December 2009, some 35 years later, the 97-year-old San Antonio man received a long-awaited degree from UNT.

“To be my age and have this happen is really something,” Kretz-schmar says. “This was a thrill.”

His son, John Kretzschmar, recently found papers and transcripts that showed his father had completed all of the courses for his degree. The family contacted UNT, which decided to award Kretzschmar a master’s degree based on his lifetime contributions.

The former student served in high-level positions in the U.S. Air Force, but never wavered in his commitment to education. In the ’50s, he offered night English courses to soldiers in Korea. He also taught in public schools and universities, serving as a dean at Texas Christian University and as an academic administrator at Plattsburgh State University of New York.

Kretzschmar shared a love of education and learning with his family. So it was only fitting that his granddaughter, Erin Pallares of Frisco, accepted the diploma in his honor at the December graduation ceremony. She is pursuing her own master’s degree in education.

“My father taught all of us to value education and the importance of earning a degree,” John Kretzschmar says.