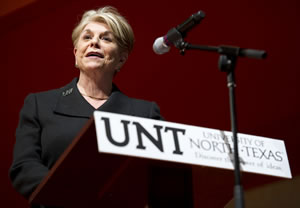 UNT opened its campus Jan. 14 to about 800 attendees and nearly 100 members of the media who covered The Texas Debates: The Race for Governor at Winspear Hall in UNT's Murchison Performing Arts Center.

While some UNT students, alumni and community members filed in to the Murchison, many wearing buttons or T-shirts to support their candidates, others were working behind the scenes.  Planning and production of the event included efforts from UNT faculty serving as media experts, and alumni and student members of the media at KERA, NTTV, KNTU and other outlets. (Get a glimpse of the action behind the scenes by viewing our photo gallery.)

President Gretchen M. Bataille welcomed the candidates and attendees, recognizing UNT's importance as a public university to provide a forum for the democratic process.

"It is UNT's mission — and indeed our responsibility — to foster understanding, to encourage reflection and to provide avenues for people to be engaged in the world around them," she says.

In addition, the Denton County Republican Party hosted a Watch Party in the Gateway Ballroom, which included about 75 Republican candidate supporters who watched the debate on a large projector screen. UNT alum and Denton resident Jim Killian ('72) says that he decided to attend the party to become more educated about the candidates. And he was excited to have the debate at his alma mater.  "It's a great step for Denton," he says.

The Texas Debates was produced by KERA in partnership with CBS 11 (KTVT-TV) and TXA 21 (KTXA-TV), the Fort Worth Star-Telegram, KUVN Univision 23, The Texas Association of Broadcasters (TAB), Texas State Networks and the Freedom of Information Foundation of Texas.

The debate is archived and can be viewed on KERA's Texasdebates.org web site.

UNT alumni and students helping to make the debate happen

Four KERA staffers and alumni were integral for the debate production's success.

"UNT is perfect for this kind of event because of the convenient location and the Murchison is absolutely stunning," says Austin, who studied speech and drama at UNT and lived in Bruce Hall. "I remember we always opened our windows at 1 p.m. so we could hear the One O'Clock Lab band play. It's so much fun to come back and see all the old things, but the changes too. The campus has improved so much."

Marc Moffitt ('01), recording secretary for the Denton County Republican Party, which helped organize the debate, says that UNT serving as host is proof of the university's dedication to excellence in serving Texas' educational needs – helping to educate voters.  And he also recognized UNT as a prime location for the debate.

"Everyone has seen that UNT is a top tier university in this region. There is not another venue in the area that matches the Murchison. Not only is it a beautiful facility, but the technology is already in place to pull off a very complex production like this," he says.

Fullwood says it was wonderful to work the event alongside so many UNT alumni and students.

"I began my career here as a news reporter for KNTU, so it's special to be here and see the next generation of journalists coming up the ranks," she says. "And attending this event gives them the opportunity to see the importance of their future careers and how integral they are to the political process."

Student media work alongside the pros

Garcia helped set up and man video equipment in the media access room, while Roberts spent the last week researching each of the campaigns for Austin and Kofler . She also helped get audio clips out in the field.

"I am proud of myself to be helping with this kind of program. It's a really big thing," Roberts says. "Not many students get to work an event like this."

NTTV's team of eight student staffers and about 30 volunteers prepared all week for the debate, organizing four different teams for coverage.

Megan Martin, a junior journalism major, says the outpour of student volunteers when classes have not begun back up is a testament to their commitment to news.

"The fact that I'm here to meet and work alongside media in the No. 4 market in the country is great, a real hands-on experience," Martin says.

Sarah Bryant, senior RTVF and news director of the student station says, "We are the only school in Texas that has the ability to do this kind of production. That's why I chose to come to UNT."

"This is very important political event, a major kickoff between the candidates and to snag this for UNT is a major victory," Todd says. "It demonstrates that we have the capacity to do this and to do it well on top of bringing a major political contest directly into our laps, which is a great learning opportunity for students."

The political process up close

Nick Stevens, a sophomore at UNT, attended the debate because he wanted to keep an open mind. While he typically votes for Democrats, he wanted to hear what the Republicans have to say.

"I'd like to hear what they say about education and about health care," Stevens, an economic major says. "I want to know if they see any room to work with our president."

Stevens says he was thrilled to hear UNT was hosting the first GOP gubernatorial debate in such a visible election.

"I was really impressed," he says. "I think this speaks volumes about UNT. What a great thing."

After the debate, Kip Mooney, a senior journalism major, and Nathan Webb, a junior general studies major, discussed UNT's role in the event.

"It's a great opportunity for the school. A lot of people don't realize we're one of the largest universities in Texas," Mooney says. "This puts UNT in the statewide and even national light."

Webb, who wants to eventually enter politics, says the debate served as an opportunity to see how politics works firsthand.

"I hope I'm up on that stage as a candidate someday," he says.