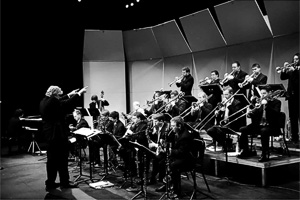 After garnering two Grammy Award nominations in one year for the first time in its history, the One O’Clock Lab Band celebrated along with other UNT alumni at the star-studded awards ceremony Jan. 31 in Los Angeles.

Current band members and former members who played on the album flew to California for the awards show, which coincided with an already-scheduled performance tour at the Folsom Jazz Festival and Catalina Jazz Club, among others.

The band’s two categories were announced in a pre-televised show available for viewing on the Grammy web site. Later that day, the band attended the televised portion at Los Angeles’ Staples Center, where stars such as Beyoncé and Taylor Swift performed.

Band members posted Twitter updates — marveling at the backstage efforts of the crew putting on the enormous show — and kept their fans informed as awards were announced.

Book One by the New Orleans Jazz Orchestra earned the Grammy for Best Large Jazz Ensemble Album, and Michael Giacchino clinched the award for “Married Life” from the movie Up in the Best Instrumental Composition category. Wiest says the band was honored just to be in such company.

“To have the Recording Academy recognizing our students’ efforts in this way puts them on the same level as the best pros in the nation,” he says.

The band’s albums have received four other nominations in the past — bringing the grand total to six. In the 1970s, the band received Grammy Award nominations for performance on Lab ’75 and Lab ’76. In addition, Mike Bogle (’87, ’89 M.M., ’00 D.M.A.) earned a nomination for his arrangement of “Got a Match” on the band’s Lab ’89 album. In the 1990s, former One O’Clock Lab Band Director Neil Slater’s composition “Values” from Lab ’91 earned a nomination for Best Instrumental Arrangement. Slater, who had the composition “Another Other” on Lab 2009, joined his former band at the ceremony.

This was the band’s first year to attend.

“I couldn’t be more proud of the work that these students do, and to have their efforts honored at the ultimate professional level while still in school speaks volumes about their dedication and talent,” Wiest says.

This was the second individual Grammy nomination for Wiest. Previously, he earned a nomination for Best Instrumental Arrangement for “Besame Mucho” from the CD The One and Only Maynard Ferguson.

Alumnus Dave Love, the founder and former president of Heads Up International, served as executive producer for several nominations from his former label: Joe Zawinul’s 75 won the Grammy for Best Contemporary Jazz Album, and Mike Stern’s Big Neighborhood earned a nomination in the same category. Spyro Gyra’s Down The Wire and Hiroshima’s Legacy earned nominations in the Best Pop Instrumental Album category.

Love is the U.S. manager for Omara Portuondo, whose Gracias was nominated for Best Tropical Latin Album and won a Latin Grammy in 2009.

You can catch all nine UNT lab bands at the annual Lab Band Madness, which this year is moving outdoors to the Denton Arts & Jazz Festival at Quakertown Park. The lab bands will play from noon to 9 p.m. April 24 on the festival’s new UNT Showcase Stage, which will feature UNT jazz groups and College of Music ensembles April 23-25.