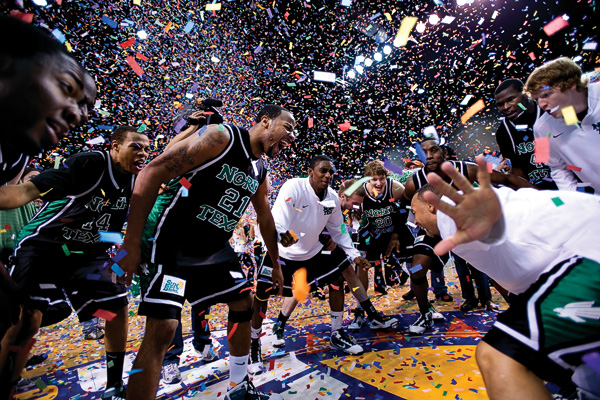 The Mean Green men’s basketball team ended its season at the NCAA Tournament March 18 after falling to Kansas State 82-62 in the first round. The trip to the tournament was the Mean Green’s third in school history — and the second time in the last four seasons — after a record-breaking year. The team’s 66-63 victory over Troy March 9 to win the Sun Belt Conference Tournament and a bid to the "Big Dance" came down to the final seconds and was the team’s 11th straight win in a season that saw a school record 24 victories. 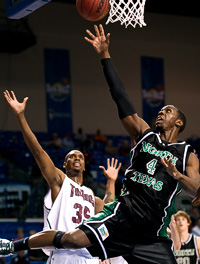 “It’s been a long journey, but the players had the mission, mindset and will to win,” says Johnny Jones, head coach. “You could see it in their eyes.”

Support ran high as students and alumni followed the Mean Green during the conference tournament March 6-9 in Hot Springs, Ark., through watch parties and in person as the team earned its NCAA bid.

Freshman Brad Ballard traveled on the Spirit Bus with other students to the final game against Troy.

“It was really cool feeling the huge rush of emotions, knowing that we were on our way to the NCAA,” he says of the win, adding that the stands were dominated by UNT fans. “I couldn’t be more proud of my university.”

The win was followed by a confetti-raining postgame celebration in Hot Springs and a pride-filled welcome home from fans on campus.

UNT had four players named All-Sun Belt Conference for the first time in the program’s 92-year history. George Odufuwa, who ranks 12th in the NCAA in rebounding, was named to the All-Sun Belt second team, while Eric Tramiel, Josh White and Tristan Thompson earned third-team honors.

Odufuwa was one of just 22 players in the nation who averaged a double-double (11.5 points and 10.7 rebounds) on the season, and was the top rebounder in the league by more than two boards per game. One of just four players in school history with a 300-rebound season, the junior became just the ninth player in the NCAA since 2005-06 to get at least 24 rebounds in a single game, a feat he accomplished in the season opener.

Tramiel was named the Most Outstanding Player for the conference tournament after leading the Mean Green with 20 points and 10 rebounds in the Troy win, his second double-double of the tournament. The lone senior in the starting lineup, he missed five games with an injury and averaged 13.8 points on 58.9 percent shooting after his return.

White was one of just three players in the conference to average at least 14.9 points and 3.6 assists per game, and his 231 career assists ranks 10th in school history. In the Troy game, the junior scored from near the free-throw line with 22 seconds remaining and hit a free throw with 2.9 seconds remaining to give the Mean Green the tournament win.

Thompson, also a junior, had some explosive scoring performances in league play. He was just one point shy of reaching double-figures in all 18 conference games, and averaged 16.8 points on 46.2 percent shooting in Sun Belt contests.