The old stadium comes down, but the memories live on.

e bid a final farewell to Fouts Field beginning in November, but we won't forget the stadium that served Mean Green football from 1952 to 2010, and Mean Green track even longer. Take a look at its history, enjoy the reminiscences of players and fans, and share your own Fouts Field memories with us at northtexan@unt.edu. 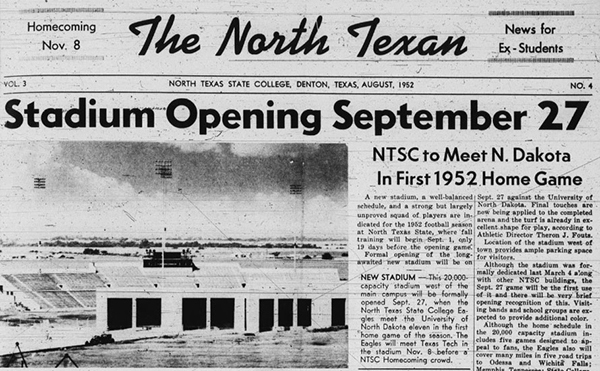 August 1952 issue of The North Texan

Fouts Field Through the Years

1952: The stadium, known as Eagle Stadium for its first few years, opened Sept. 27 with speeches, 11 visiting bands and a resounding 55-0 win over the University of North Dakota. Its original capacity was 20,000.

1954: The Board of Regents voted in May to rename the stadium Fouts Field in honor of Theron J. Fouts, director of athletics and physical education who also served as a coach and dean of men in his 34 years at North Texas. Fouts had initiated the campaign to build the stadium along with other facilities in a master plan. He was set to retire in June 1954 but died April 27. He was lauded as a “man of vision” who placed “service above self.” 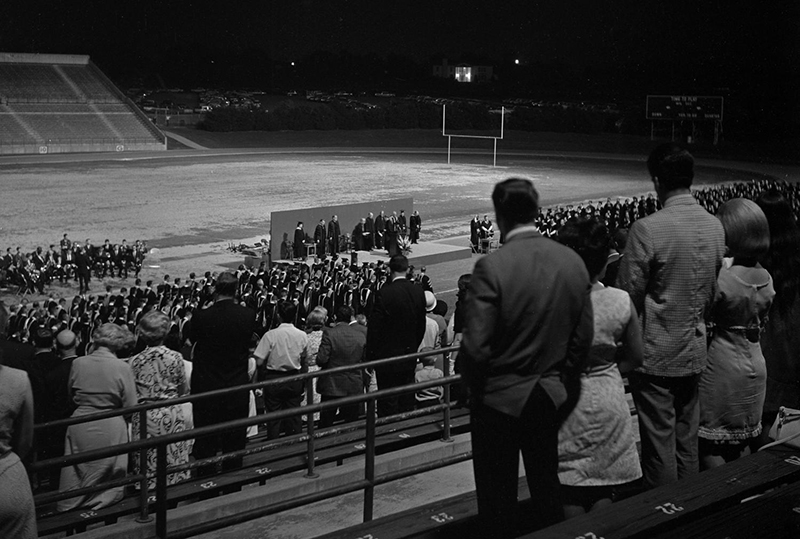 August 1956: Fouts Field hosted its first commencement ceremony. The stadium continued to serve as a graduation venue off and on, especially for summer ceremonies, until the UNT Coliseum was built in 1973.

1960: Fouts Field was home to many track and field stars through the years. Pole vaulter Dave Clark became the first from North Texas to compete in the Olympics when he participated in the 1960 games in Rome. Bill Schmidt won a bronze medal in the javelin in the 1972 Munich games. And Johnny Quinn, a wide receiver who also ran track, competed in the four-man bobsled in the 2014 Sochi games (where he also gained fame for his door-busting abilities).

1966: Our Mean Green nickname was born at Fouts Field as fans cheered on the punishing defense. One of those successful players was on his way to a legendary NFL Hall of Fame career with the Pittsburgh Steelers, where he acquired a nickname of his own: “Mean” Joe Greene.

1973: An annual tradition began on July 4 as Fouts Field saw its first fireworks show presented by the Kiwanis Club of Denton. The shows continued there until the opening of Apogee Stadium in 2011. 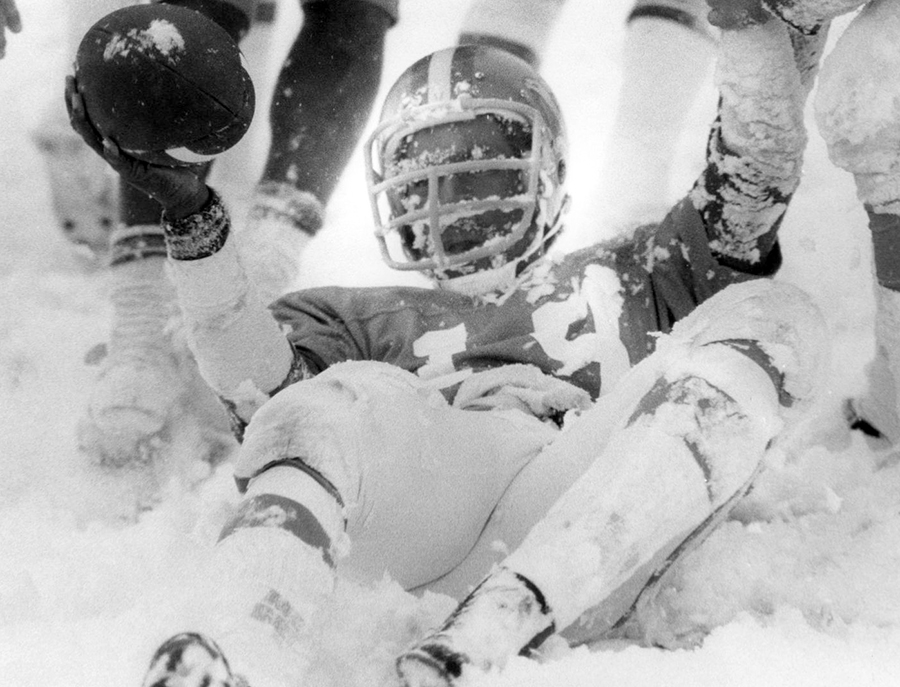 1976: One of the coldest Homecoming contests in Denton memory pitted North Texas against Florida State University and its first-year coach, Bobby Bowden. The Nov. 13 game featured a snow-covered field, a snowball fight in the stands and four horn players from the band providing half-time entertainment. The Mean Green, coached by the legendary Hayden Fry, led for much of the game, but Florida State took the win, 21-20, in the last few minutes. 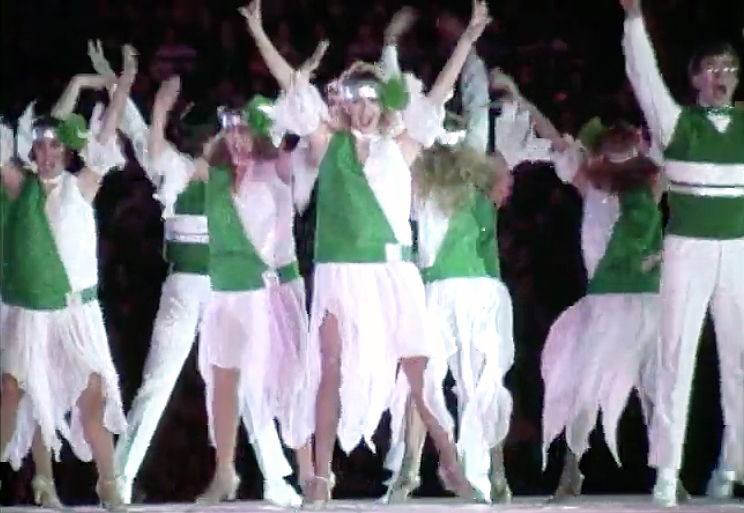 1990: The university, founded in 1890, celebrated a century of creative achievements with a Centennial Extravaganza at Fouts Field. The celebration featured 2,000 UNT student designers, choreographers, dancers and musicians as well as fireworks and famous alumni. 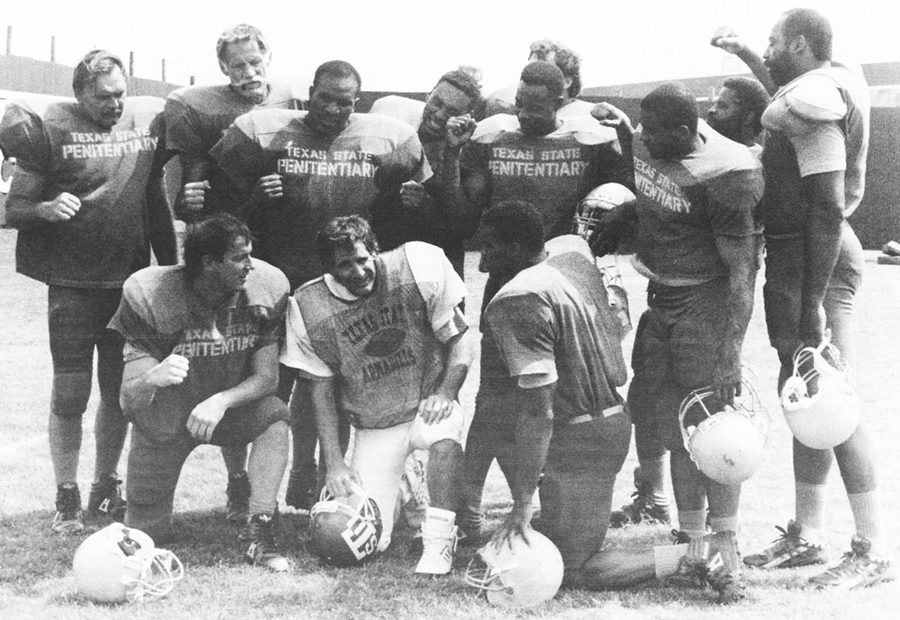 Athletes and actors in Necessary Roughness, filmed on campus in 1991

1991: Fouts Field served as the home of the Fighting Armadillos when the movie Necessary Roughness was filmed on campus. NFL athletes like Earl Campbell, Tony Dorsett, Herschel Walker and Ed “Too Tall” Jones had cameos as members of a prison team brought in for a scrimmage. The Armadillos were portrayed by actors including Scott Bakula, Jason Bateman, Sinbad and Kathy Ireland. (The stadium also appeared in The Jesse Owens Story in 1984.)

2001-2004: The Mean Green won four consecutive Sun Belt Conference championships, making the New Orleans Bowl their postseason home away from home. The four championships included a 2002 conference-clinching win against New Mexico State, prompting the fans to tear down the goalposts. 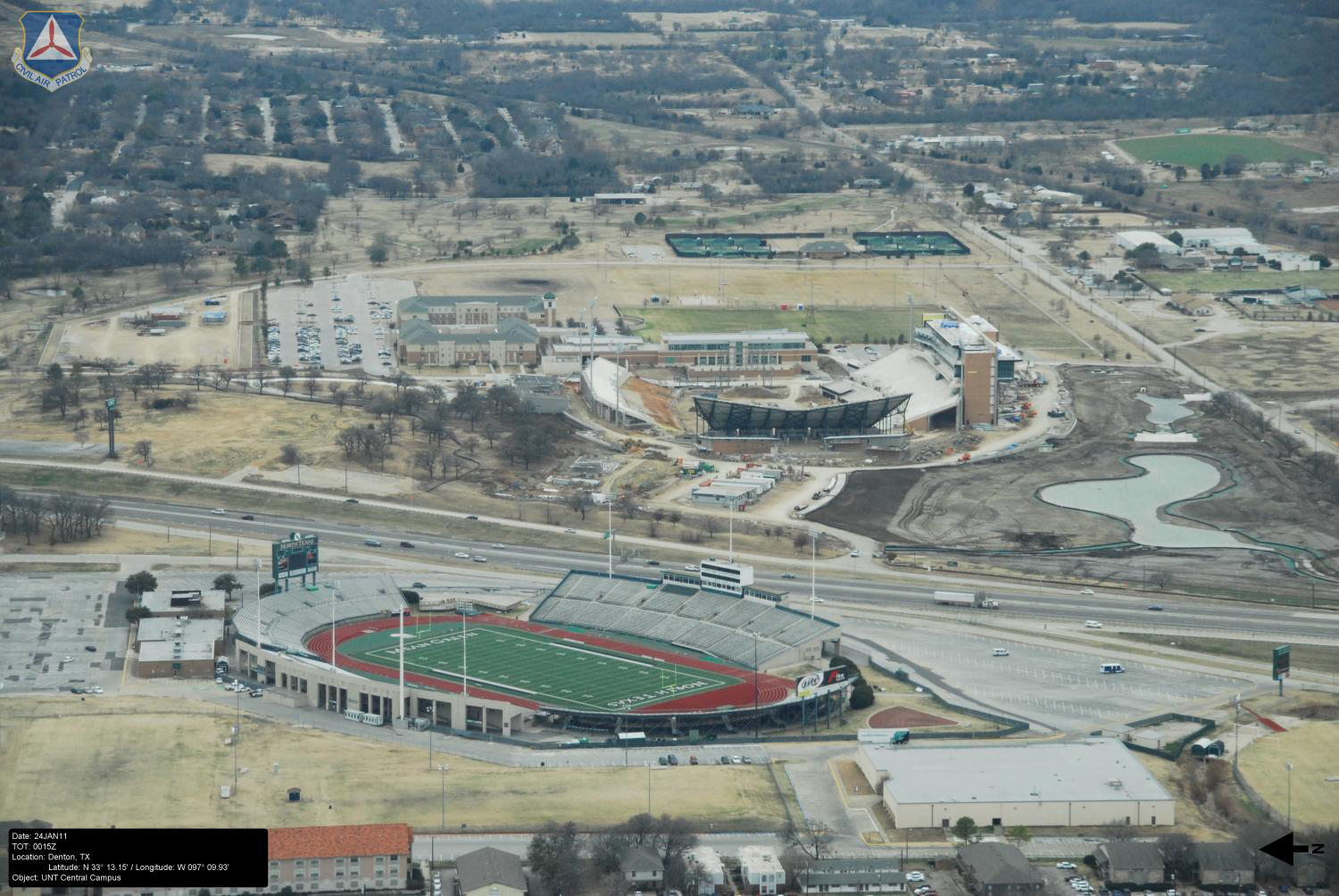 2010: In a season commemorated as the Fouts Field Finale, the last football games were played at Fouts before the move to Apogee Stadium the next year. The final game was played Nov. 27, a 41-49 loss to Kansas State. Fouts Field would continue to serve our track and field teams. 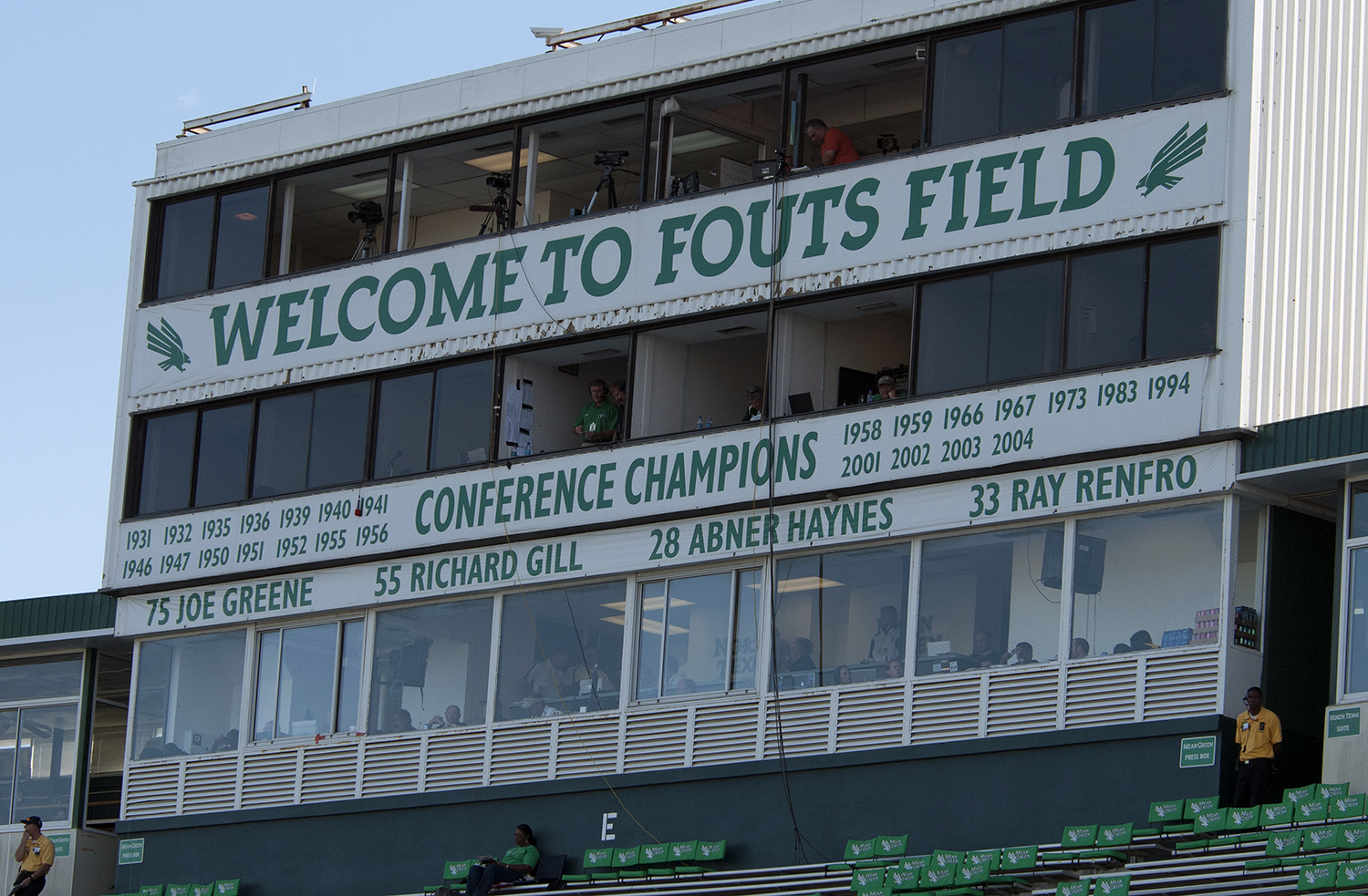 2018: With a new home for track and field due next year, the final portions of Fouts Field began coming down in November. But the memories remain. 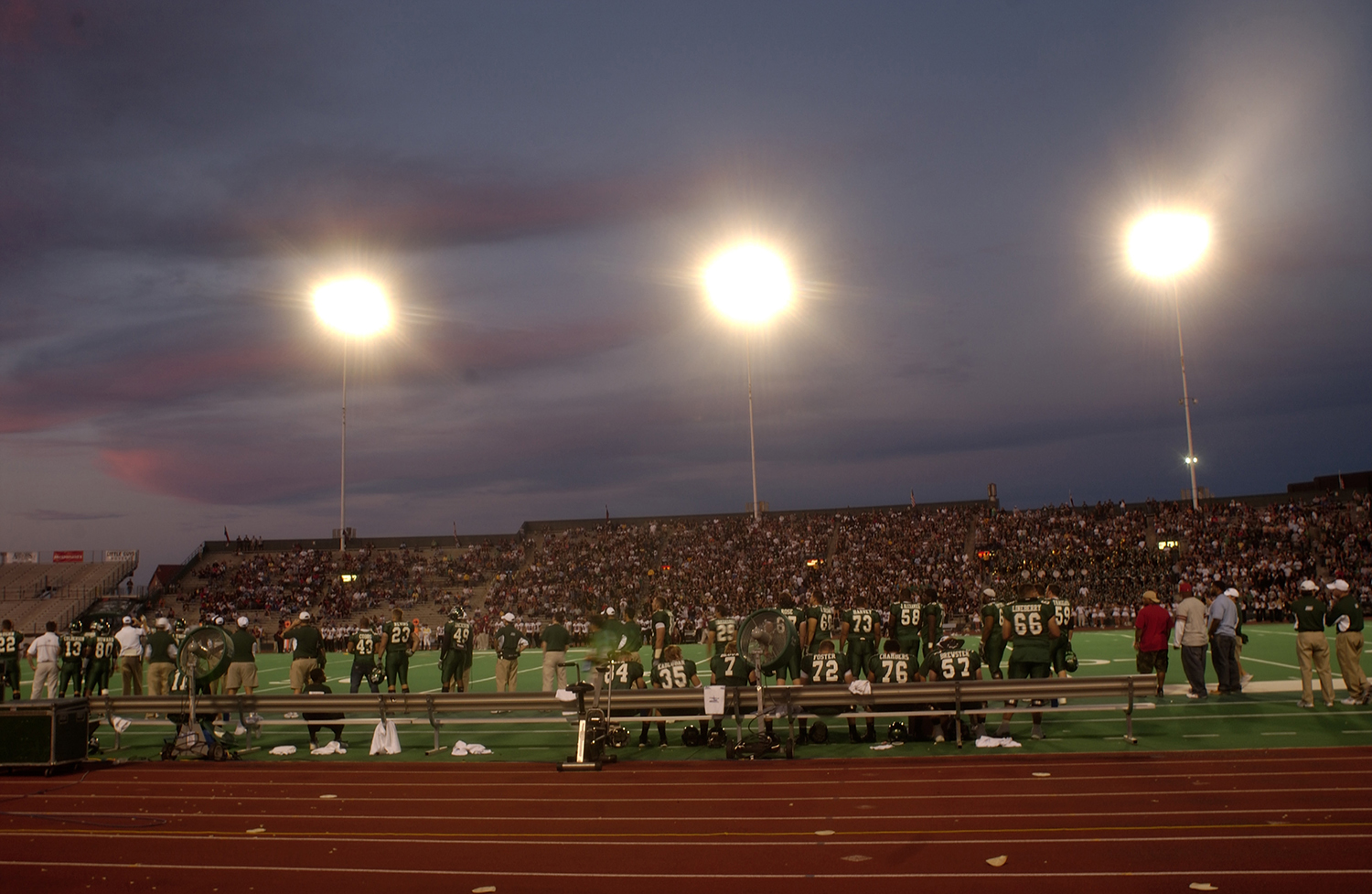 The lights of Fouts Field, October 2004

Read memories from players and fans through the years, collected during the Fouts Field Finale in 2010.

And view athletics videos of former players recalling some of the best and worst things about the old stadium:

Send your own memories of Fouts Field to northtexan@unt.edu.