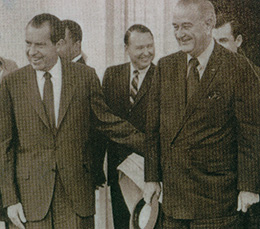 After being inducted into the U.S. Secret Service and working during the John F. Kennedy assassination ("Living History," fall 2013), I was later assigned to former President Lyndon B. Johnson.

I was there when LBJ met with President Richard Nixon in regard to a Vietnam treaty in February 1970. We exited the Oval Office and walked out the North Portico. I'm the one in the middle.

Reader looks forward to spring issue -- even when he has to wait.
Top