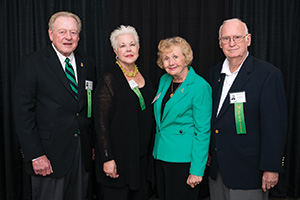 Members of the Class of 1963 gathered during Homecoming weekend for the annual Golden Eagles luncheon. Here are a few of their campus memories.

My father, Eric Brown ('63), who passed in 2004, was a high school dropout who joined the Air Force, got his G.E.D. and then finished a bachelor's degree at North Texas. I was a small child and have fond memories of living in Denton. Being at North Texas instilled a love of learning in my father, which he passed on to his children and grandchildren. He wore his class ring proudly until he passed. I don't remember ever seeing his hand without it. —  Cynthia Brown, Canton, Ga.

My most memorable experience at UNT was the surprise party R.L. hosted for me. We met as students and he stole my heart. R.L. played intramural sports and was a member of the Geezle fraternity. We enjoyed the social coffee breaks and dancing the North Texas "Push" to the music of the One O'Clock Lab Band on Thursdays at the UB. We are a Mean Green family. Both our sons, Trey and Guy, also graduated from UNT. We have a lifetime love affair with UNT and deeply appreciate the first-class educations we received. It's a thrill to come back to campus to visit. We are amazed by the excellence we experience every time. — Brenda ('63) and R.L. Crawford Jr. ('63), Lewisville.

Alumni from the class of 1963 share memories from their time at what was then North Texas State College.

I wrote my fiancé, Ronnie Matthews, every day I was at North Texas and checked the campus mailbox expecting a letter from him. My box was No. 6657 and I still remember the code, 3-7-2 ½. I bought the mailbox when the old UB was torn down to build another one. I was an Alpha Delta Pi, in student government, a cheerleader and a Green Jacket. We were married almost 48 years before he passed away in 2011. I have the mailbox sitting on a bookshelf in my den to this day as it means so much to me. — Libby Matthews ('63), Marshall

My father, Dr. F. S. Hamilton, taught at UNT for almost 30 years. I attended the Lab School from kindergarten to ninth grade. There is a large group of us who are still friends. Most of us got our driver's license when we were 14 years old. From the time I was 12 until I was a junior at North Texas, I took riding lessons at the Estes Stables. Horseback riding was a P.E. class. — Carol Lynn Hamilton Pierce ('63), Denton

My most memorable experiences at North Texas were becoming a Geezle and a manager for the football program and being the first in my family to finish my degree. But the best memory was going on a "blind date" to a Delta Gamma spaghetti dinner with Sue Kennedy. She became my wife in 1965. About five years ago, I had the honor of being a chair of the "Geezle Eagle" committee, which brought the "Spiriki" eagle statue to Apogee Stadium. ­— James L. Stinson ('63), Richardson

I proudly attended North Texas during the time it became a university.

I have fond memories of dorm life at Kendall Hall and our ever-present dorm mother, Mrs. Pipkin, who strictly enforced the 10:50 p.m. curfew. Later, I lived in the Alpha Delta Pi "ramp" in Chilton Hall where "Sing Song," fraternity "pinnings" and rush week filled my days. The early 1960s were idyllic. Our main concerns were making it to class on time and getting a date for Homecoming! I married John "Sonny" Phillips ('65), my high school and college sweetheart. We recently celebrated 50 years of marriage. — Frances George Phillips ('63), Duncanville Members of the Class of 1967 celebrated their 50th anniversary by sharing a few memories.

Calling all alumni and friends home to UNT to celebrate during Homecoming 2017.
Top