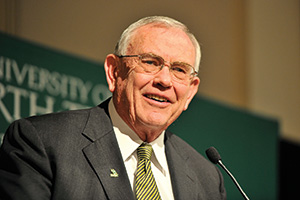 President V. Lane Rawlins likes to talk life lessons — many reflect the homespun philosophy of his farm upbringing. One of his favorites is about the farmer who cherishes his 40-year-old ax. It's had 10 new handles and three new heads, but it's a great old ax, the farmer says.

The lesson underscores a point Rawlins made often as UNT's 15th president — UNT always will excel as a student-focused university, no matter what changes occur. Now that Rawlins is retiring as president, that example is very pertinent.

"I've often said that UNT is more than a place of learning. We are an agent of change. We believe that students deserve the best, and we work hard to make sure they get it," Rawlins says. "So while people come and go, the UNT spirit remains the same."

Known for his sense of humor and down-to-earth persona, Rawlins, who joined UNT in May 2010, is a leader with vision.

At UNT, he pushed for a more effective organization to give students the best education possible and to create opportunities at every turn. Driven by the declaration of four bold goals spearheaded by Rawlins, UNT is growing its reputation with high-quality education, innovative programs for research and scholarship, and leading researchers, scholars and artists. It's also creating cutting-edge facilities and providing more effective service and engagement. 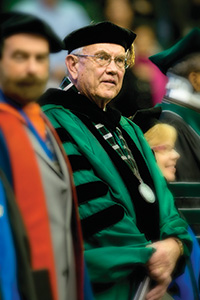 Rawlins will remain involved with UNT through a President Emeritus appointment to work on special projects to help the university in key areas.

"President Rawlins was the right president at the right time for UNT," UNT System Chancellor Lee Jackson says. "He brought the wisdom and experience of having already been a university president. He brought a passion to help students succeed. And he brought great vision and discipline to our flagship university."

Under Rawlins' leadership, UNT has continued its advance as a driving force in higher education, enrolling and graduating record numbers of students. This fall, UNT reached an enrollment high of 36,221 students, which included its most academically talented freshman class as well as the largest enrollment of doctoral students.

And more importantly, UNT is a graduation leader — third behind only Texas A&M and UT Austin in the number of bachelor's degrees awarded each year by Texas public universities.

In addition to focusing on education and research, Rawlins also worked to strengthen UNT's engagement culture. He sounded the drum and pounded the pavement to remind people that UNT is the University of and for North Texas.

The formula worked. UNT had a banner year of giving in 2011 with more than $51 million in gifts and sponsorships that impact virtually every area of the university. This year, UNT unveiled the public phase of its fundraising campaign, The light is green. The time is now. The Campaign for UNT, which introduced an era of stronger fundraising and engagement. 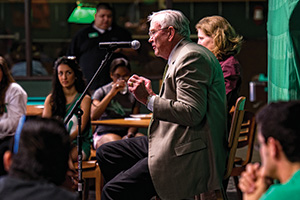 Shared decision-making and strategic planning were the hallmark of Rawlins' administration. He created President's Councils that bring together campus leaders to collaborate on key decisions for the university's future and led the creation of UNT's new strategic plan.

"President Rawlins did so many things to steer UNT on the path to excellence," Provost Warren Burggren says. "And he continually reminded us to develop stretch goals — indeed, bold goals — and reach for the stars."

Rawlins has devoted his career to public universities, starting as a college student and ending as a three-time university president, because he believes that great education should be available to everyone able and willing to pursue it.

"There is nothing else that has the power to change people's lives like public universities do — especially ones as good as UNT," Rawlins says. "I'm honored to have been a part of the greatness that exists at this university." Pia Wood has been named the new vice provost and dean of international affairs at UNT. Great things are on the horizon for the UNT Alumni Association, says Robert McInturf.
Top