How do you create a strong community — a safe community — a place where people want to gather, experience culture, shop, dine, work and live?

Alumni who earned their master's degrees in public administration from UNT's College of Public Affairs and Community Service know how and are doing just that. They fight homelessness. They find ways to turn crime-ridden eyesores into safe, new buildings. They breathe new life into old neighborhoods. They are creating economically viable communities through their work with government agencies and housing and economic development organizations. 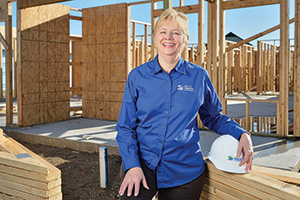 Their training at UNT has armed them to tackle complex and sometimes politically sticky issues while working side-by-side with a wide variety of community partners — often while juggling tight budgets.

"It was when I was at UNT that I really came to appreciate the importance and dignity of public service," says Jane Massey ('79 M.P.A.), director of neighborhood research and revitalization for Dallas Area Habitat for Humanity. "We hear so much bashing of bureaucrats and the government. I think we have lost that concept of people being public servants and really working to try to advance the common good — and I learned a lot of that at UNT."

Massey began her career in the community development office in Lubbock, later working in the same capacity in Garland while going to graduate school.

Learn more about the study by UNT researchers to identify the most blighted areas of Dallas.

"It was convenient for me as an already-in-career student," she says. "And UNT was very supportive of students."

After earning her degree, she taught as an assistant professor of political science at Georgia State University before becoming a budget analyst in Charlotte, N.C. Massey also worked at the University of South Carolina Institute of Public Affairs and the Georgia Future Communities Commission and has consulted for the public sector and nonprofit organizations.

Now, with Dallas Area Habitat for Humanity, she evaluates the impact of housing programs. This summer, she worked with four UNT researchers who conducted a study to identify the most blighted areas of Dallas. The study, commissioned by Dallas Area Habitat for Humanity, resulted in a forum of community leaders discussing possible solutions, including setting goals and priorities for blight reduction, establishing a data-based system that measures progress and working on targeted high-priority properties.

"My career has led me to Dallas Area Habitat in a way that I kind of marvel at," she says. "I took 30-plus years of experience and found myself in a place where we are making a difference in neighborhoods and lives day to day. And in our own small way, we are helping change the face of Dallas in a good way." 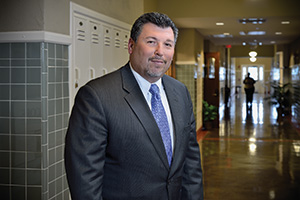 U.S. News & World Report ranks UNT's city management and urban policy graduate program eighth in the nation. And the program has a strong history of producing highly ranked talent. More top-level city executives in Texas hold a master's degree from UNT than any other university.

"The program is ranked really high when it comes to city manager and local government programs, and it's for a good reason," says Jay Chapa ('93 M.P.A.), housing and economic development director and interim finance director for the city of Fort Worth. "They require internships that give you real-world experience, and they bring in professors who have worked in municipal or local government."

In his career with Fort Worth, Chapa has been involved in such projects as including affordable apartment units in the city's West 7th mixed-use development and revitalizing southeast Fort Worth with Renaissance Square, a new retail hub anchored by a Walmart Supercenter and other major stores.

"I have always had a sense of and have enjoyed politics and was involved in nonprofits growing up," Chapa says, but he found his niche within public administration while getting his UNT degree. "The UNT program shepherded me to the local government side of things." 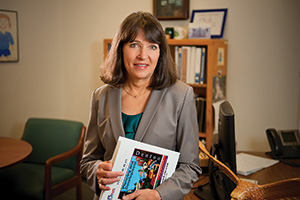 UNT's M.P.A. program inspired an unexpected career change for Barbara Ross ('87 M.P.A.). Ross was teaching government at Trinity High School in Euless when she decided to pursue a master's of public administration — simply with the goal of bringing more knowledge back to her classroom.

Instead, her degree sparked a long-lasting career creating stronger communities. For nearly three decades, Ross has served in the community development office for the city of Denton — and for the last 25  years, she has overseen the department.

She and her team administer community development block grants from the federal government in an effort to prevent and end homelessness, provide housing assistance and conduct public improvement projects in low- and moderate-income neighborhoods.

One of those recent projects is a renovation and expansion of Denton's Fred Moore Day Nursery School, which provides affordable child care with tuition set on a sliding scale basis. Expanding the facility gives more families access to child care, allowing them more opportunities to work. That, in turn, helps keep the community's economy strong, Ross says. Whether her team members are  building community facilities or writing a work order to install new flooring in a single-family home, they're making a difference, she says.

"I particularly think my staff has done a very good job of reaching out to the community," says Ross, a former president of the National Community Development Association. "That is something I learned from the M.P.A. program. Being a manager or administrator doesn't mean telling everyone what to do. You get opinions; you listen." 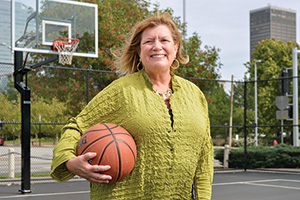 Jane Jenkins ('95 M.P.A.) earned her degree while working at the city of Denton as the downtown development director. Now president and CEO of Downtown Oklahoma City Inc., she has played an important role in managing Downtown Oklahoma City's growth the last few years. Upcoming projects such as a new downtown elementary school, streetcar and 70-acre public park, and completed projects such as a community basketball court, have added to the city's effort to create a place people desire to live as well as work — bringing the community together.

"The economics of a downtown district are very much tied to the number of permanent residents" she says. "Once home only to the homeless, downtown is now a neighborhood with expanded opportunities for business, cultural and economic activities."

Discussions are now centered on also exploring an outdoor soccer cage and volleyball court due to the tremendous response to the community basketball facility.

"It's well taken care of because people value it. It is projects like these that involve community partnerships where my education at UNT has proven so valuable," Jenkins says. "Collaboration can make a difference. It's amazing."

As director of aviation for the city of Dallas, alumnus Mark Duebner prepares for everything.

UNT's diverse environment, learning opportunities give students an edge as they map their success across the continents.