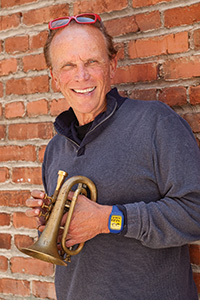 Mention Peter Weller's ('70) name and you'll get a pretty strong reaction. Usually it's, "I loved him as RoboCop," though fiercely loyal sci-fi fans declare, "He was Buckaroo Banzai first."

However, Weller's life expands well beyond his two iconic characters. He has dozens of acting and directing credits, a jazz sextet, a master's degree, a Ph.D., and what he describes as his most rewarding role as a first-time father to a toddler.  When Weller first studied at North Texas in 1966 as a trumpeter, he wanted to emulate the music his mother taught him to love — Duke Ellington, Miles Davis, John Coltrane. Weller's father was in the military and the family had lived in Germany but settled in San Antonio, so he knew of the reputation of the jazz program.

Although he was a member of the Four O'Clock and Five O'Clock lab bands, Weller realized at 20 that he might always have a job in the band, but he might not get the chance to be the headliner.

"I was always goofing around on stage," Weller says adding that acting was his childhood hobby. "I wasn't serious until I realized I didn't want to be just another musician on the bandstand. I wanted to be Miles, and that was not going to happen."

So he started taking theatre classes and soon changed his major. His college productions included Death of a Salesman and All the King's Men, plus an original production, The Guest.

"My dad taught me to finish what I started," he says. "He gave me a good sense of discipline and resolution."

Get to know
Peter Weller

Read a Q&A with Peter Weller

Those qualities moved Weller to land a scholarship to continue acting classes in New York. He studied at the American Academy of Dramatic Arts and, professionally, with legendary Tony Award-winning actress Uta Hagen. He was brought into the Actors Studio in the 1970s by another legend, Elia Kazan. As a professional actor and director, Weller has more than 70 credits, appearing earlier this year in Star Trek Into Darkness.

With a master's degree in Italian Renaissance art history from Syracuse University in Florence and a doctorate in 15th century intellectual and art history from the University of California at Los Angeles, Weller is dedicated to learning, teaching and his love for visual art.

"Film is the continuation of Western narrative painting," he says. "If you look at Giotto's work in the Arena Chapel in Padua, you're seeing a 14th century movie."

Weller continues to play trumpet and sing in his LA-based jazz sextet, which he started when Miles Davis, whom he befriended, and actor/director Woody Allen urged him to play in public again.

And he directs a quarter of each season of the FX's Sons of Anarchy, in which he also acted in 2013. Weller also directs Hawaii 5-0 for CBS, Longmire for A&E (in which he also acts) and Guillermo del Toro's new series, The Strain, also for FX.

Reflecting on his accomplishments, Weller notes commitment made it possible.

"There is no dress rehearsal," he says. "The secret is determination and tenacity. Get up and hit it from 'jump street.'"