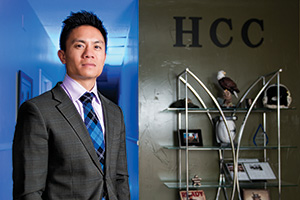 Entrepreneurship runs deep in his family, says Andrew Nguyen ('08). As the son and grandson of business owners, he knew he wanted to follow the same path.

After the Sept. 11 attacks, Nguyen enlisted in the Marine Corps and served four years of active duty, including two tours overseas. When he transitioned off active duty in 2006, he researched schools that had strong entrepreneurship programs, and he decided on UNT — where he got the foundation he needed to turn an idea into a solid business plan.

"I remember vividly sitting in class as a 26-year-old with a predominantly younger generation," he says. "My perspective had changed. In Afghanistan, I saw how the Taliban punishes women and children for learning. To come back to this great country and to be able to sit in class and learn — it doesn't get any better than this."

With the know-how he gained in UNT's College of Business classes, he became the owner of WSI Search, a digital marketing and web development firm. The Dallas-based company recently rebranded as 03Entrepreneur, which also helps people develop or expand businesses and funds new concepts. In 2011, he launched Honor Courage Commitment, a nonprofit to help veterans build on their leadership skills, start businesses and give back to the community. The veterans have helped rebuild a home for victims of the recent Granbury Tornado, and raised money for families affected by Moore, Okla. Tornado and the West explosion.

For his efforts as CEO of 03Entrepreneur and president of Honor Courage Commitment, Nguyen has already racked up accolades, including recognition as Dallas Furniture Bank's 40 Under 40 and the 2013 Small Business Administration DFW Small Business Veteran Champion of the Year. And he recently contributed as associate producer on a feature war film, Thunder Road.

"This commitment to serve didn't stop when I left Afghanistan or the Marine Corps," says Nguyen, who served in the Marine Corps Reserves for seven years after active duty. "My passion is to create jobs, see things grow and use the skills that have been built in me from the military and the education I received."