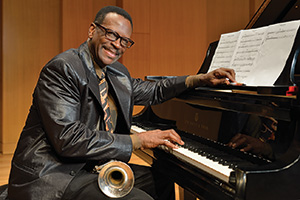 As an elementary school student in Fort Pierce, Fla., Will Miller ('13) took one look at his sister's high school band uniform and fell in love with the idea of wearing one and being in a band. Though he originally wanted to play drums, his seventh-grade band director guided him toward the trumpet, which would ultimately be the instrument he played for the One O'Clock Lab Band, for the U.S. Army Jazz Band and with celebrity musicians including Barry White, Aretha Franklin, Duke Ellington, Diana Ross and more.

In ninth grade, Miller's band director, Harry Grant, talked about his son, Gary, a trumpet player in the One O'Clock Lab Band. Miller continued to hear great things about the university, and after a year at college in Tennessee and a year off, he was accepted into the music program.

The first semester, he made the Eight O'Clock Lab Band, then worked his way up — Five O'Clock, Four O'Clock, Three O'Clock and, in 1978, lead trumpet in the One O'Clock. Yet, with nine credits needed to graduate, Miller joined the Army Band.

After three years in the Army Band, Miller moved to L.A. where he met Gary Grant. With Grant's help and the solid reputation of the jazz studies program behind him, Miller found steady work — but something still nagged at him.

"Completing my degree was always in the back of my mind," Miller says.

With the help of online courses and a trip to Denton for a senior recital, Miller was able to achieve that dream this month, earning a bachelor's degree in music composition. Miller still loves performing with bands and doing his own work, but having a degree will open up many more opportunities. And he says he's thankful for the support from music professors Thomas Sovik and John Murphy.

"They helped me discover the formula for success," he says.