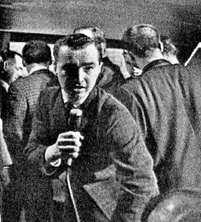 We who are old enough remember where we were when we learned of President John F. Kennedy’s death. The brutal impact of that news and the magnitude of the tragedy will not leave our memories.

On Nov. 22, 1963, I had broadcast the president’s motorcade from the corner of Main and Akard in the city’s heart, where vast crowds of cheering well-wishers had given JFK and his beautiful wife a warm welcome to Dallas. Ticker-tape flowed from windows high above us and mixed with dancing confetti as a wave of excitement followed their glittering limousine through those skyscraper canyons. I had set starry-eyed children atop my KRLD Radio mobile unit’s luggage rack so that they could get a good view of the first couple. I was still reporting while Lee Harvey Oswald was killing President Kennedy barely more than a thousand yards away. I could not hear the three shots that echoed through Dealey Plaza.

A few minutes later I was behind the wheel, speeding with my colleague Warren Fulks to Parkland Hospital, where I drove around the barricades just set up by the police and Secret Service. I jumped the station wagon over the curb and across medians all the way to some 150 feet of Parkland’s emergency entrance. There among the growing crowd that had begun sifting into the parking lot and standing in vigil together, I broadcast the saddest scene of my life:

“What was a wonderful welcome in downtown Dallas has become a scene of indescribable horror, as hundreds of people crowd outside the back door to the emergency room here at Parkland Hospital. Faces are ashen white. And people are wondering, ‘Is our president going to live?’ President Kennedy is on the inside of Parkland Hospital, and two priests have just been sent into the room with the president.”

Dignitaries who had been in the motorcade milled about in shocked confusion, unable to go inside the hospital, and they stood in hushed conversations. I interviewed them as gently as I could. Sen. Ralph Yarborough burst into tears at my first question. Congressman Ray Roberts was barely able to speak.

Warren Fulks and I gave our KRLD listeners as much information as we could get, summarizing for them the stark facts, letting them know that we would stay on the air to keep them informed about the fast-moving tragedy, updating them with each shred of information we could get.

As time passed, Congressman Jim Wright of Fort Worth agreed to come with me to my mobile unit so that I could interview him by way of its two-way radio. The future House Speaker and I stood together in the silent crowd, as my unit’s radio told us that JFK was dead.

“We have just learned that our president is dead This is a sad day -- a day of grief, a day of shame for this land that anyone would hate, that anyone would seek to kill the president of the United States. We must strive anew to rebuild our faith and our hope. May a merciful God console his loved ones and his family. May that same God bless this land, that from this moment of such deep grief we may rebuild in faith, and not in fear -- in love, and not in hate. I know the nation mourns and will deeply mourn. Those of us who were with him today when he was so alive, so buoyant, so outgoing, exposing himself to the public, will never forget this experience and will always remember him as the president who went to the people, not fearing to expose himself -- his person, his safety, his own repose -- to his land and his people. It is tragic that in this free land anyone would so learn to hate in his heart that he would seek to take violently into his hands this kind of an act. But it has been done. There is still in this land the fiber to rebuild on a  basis of respect for duly constituted authority. And we must do it, and we must not panic.”

The wise words of that brave man haunt my memory a half-century later. The indelible grief will never leave me, nor will that moment of muted hope with the great-hearted Jim Wright, who served his country as Speaker of the U.S. House of Representatives.

Editor's note: Huffaker, then a reporter for CBS television and radio affiliate KRLD, also relayed the news of Jack Ruby's shooting of Lee Harvey Oswald to the national television audience live from the scene (pictured above in a photo courtesy of KRLD-TV, KDFW-TV/The Sixth Floor Museum at Dealey Plaza). The 2004 book he co-wrote with Bill Mercer ('66 M.A.), George Phenix and Wes Wise -- When the News Went Live: Dallas 1963 -- was released in a new 50th anniversary edition this fall. Huffaker also was featured in press around the world in November, including live on MSNBC and in documentaries on CBS, CNN, Discovery and PBS. Read about other UNT-related media coverage surrounding the anniversary.

While America is remembering events surrounding the death of John F. Kennedy in 1963, through the perspectives of high-level officials and national and world figures or North Texas students in well-placed positions that day, I recall with vivid memory how students on the North Texas campus learned the news. Having left my dorm room in Terrell Hall for an advanced French class, as I crossed Avenue B near the old Language Arts Building, I became instantly aware that something was wrong.  Rather than the bustling activity of students rushing to be somewhere, there was a pall of silence at every place you looked.

Everywhere on the streets and lawns, people were frozen in their tracks. It was as though someone had pushed a “stop” button and all the robots ceased movement. Everything was completely still. Some students were quietly talking to one another in hushed tones; others were completely silent -- meditating on the news they had just learned. Other students were in small groups, huddled around automobile radios where blow-by-blow reporting of news continued.

It was from one of those radio broadcasts that I learned of the death of President Kennedy. No one knew yet what it all meant. As students of the early ‘60s we were accustomed to burning flags and other items, or protesting world events we really didn’t understand.  But this immediate event, only a few miles away, held an impact we could not comprehend, so we did not know what to do with the information.

The stark quiet on campus seemed to yell: “Something major has happened just now!"

As one of the majority who didn’t realize the import of an unfinished parade in Dallas, I continued my journey to class.

We, the students of the French Civilization class that afternoon, knew in advance that Professor Marian DeShazo would not conduct the class, that the class would be unusual anyway. Dr. DeShazo had arranged for an interim instructor while she attended a luncheon at the Trade Mart in Dallas, where President Kennedy was to speak at a fund-raiser.

The few students who reached the classroom were dismissed by the interim instructor. Although we returned to our residence halls to follow the news stories on the dorm television, as reporting continued, the French students were anxious to learn about our professor’s experiences that day. She was silent on the subject when she returned.

The memory of students frozen in their tracks on campus dominates my recall of the news surrounding the death of a president by an assassin in my lifetime.