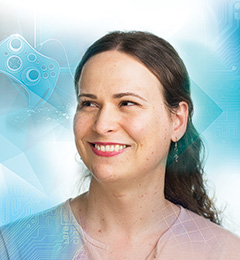 Emilia Schatz ('01) conjures ghosts and creates forests for a living.

As a designer for video games such as Ghostbusters, The Last of Us and Uncharted, Schatz uses the wide variety of skills she developed at UNT -- from programming in her computer science classes to 3-D modeling in her art courses.

"One of the most challenging and exciting parts of my job is being a jack of all trades," says Schatz, who is lead game designer for the Los Angeles-based company Naughty Dog. "We have to understand a little bit of everything -- programming, sound design, animation. We're the directors. We're the carriers of the creative vision."

Schatz isn't the only alum melding science with art to produce innovative work. One artist is using 3-D printers to create lost artifacts, and another is building installations with LED lights to comment on the environment. A designer is creating sustainable fashion. And a musician is researching medical needs for fellow performers.

These projects represent a long line of innovation at UNT. This legacy is being extended with the launch of UNT's collaborative Institutes of Research Excellence, the university's investment in arts technology programming, and UNT's leadership in the STEAM movement -- science, technology, engineering, arts and mathematics, a shift beyond STEM disciplines to include the arts.

Other established interdisciplinary programs at UNT include the Laboratory for Recreational Computing (LARC), which through collaboration between art and computer engineering trains video game designers such as Schatz. The Initiative for Advanced Research in Technology and the Arts (iARTA) unites participants from diverse fields -- from dancers to physicists -- to create software, technical demonstrations and art.

The Texas Center for Performing Arts Health (TCPAH) studies injury prevention, care, research and education for performers. And a new UNT Collab Lab to open this year will provide a collaborative incubator space for students, encouraging creativity, technology and the entrepreneurial spirit that has long been part of UNT's DNA.

"The application for 'STEM to STEAM' is important. It's not left brain vs. right brain," says Greg Watts, dean of UNT's College of Visual Arts and Design, "but rather a confluence of all areas of study to spark a multitude of collaborations that can lead us to as yet indiscernible places."

In the video game Uncharted, treasure hunter Nathan Drake faces all kinds of danger as he seeks to solve mysteries around the world. Depending on what game level the fictional character is traversing, he may go rock climbing or walk through forests. And it's Schatz who helps make it happen.

As a designer for Naughty Dog, she helps direct the player's experience. Her specialty is level design, in which she plans the level's overall flow and then models the rough shapes of the environment the user will be moving through. Then she works with artists, programmers and animators to translate the concept into a finished shape.

Her career path began at UNT, where she majored in general studies and focused on three minors -- computer science, art and English. After graduating, Schatz went to work as a game design scripter at Terminal Reality, where she programmed level scripting, code that manages the moment-to-moment journey of the player.

"I get paid to express myself creatively," she says. "It's a rewarding experience to build something in 3-D and go to your TV and play the character you created. We aren't limited by reality. The possibilities are endless." 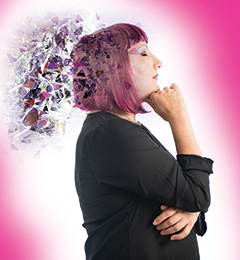 Adela Andea ('12 M.F.A.) is not interested in traditional art techniques.

"My specialty is not to repeat the past," she says. "I want to develop something that is new and different."

The Romanian-born artist, who is based in Houston, uses another form of technology -- light, with a focus on LED light -- for vibrant installations that re-create scenes from nature in the age of climate change.

The idea for one installation came during a boat tour in Alaska, where she witnessed melting glaciers. The result was Zero Degrees Celsius, a piece that takes up an entire room, with the lighting incorporating translucent whites and blues so they look like ice.

She re-created nature again with Primordial Garden, an installation at Texas Tech University, in which a series of multicolored balls, made with LED and flex neon, connect with coils and Plexiglas tubes and hang from the ceiling.

She learned many of her techniques during the hybrid forms art class she took under Susan Cheal, associate professor of drawing and painting at UNT.

"The most important thing I learned from the class was to trust myself deeply in my artistic visions, to embrace the intuitive nature of art as well as the hard-working aspect of the visual presentation of installation art," Andea says. "I was encouraged by the fresh, innovative and experimental ideas put forward in this field."

And that led to putting forth her own ideas through nature and technology.

"Why does there have to be a separation between the two, a contrast?" she says. "That's where my art starts to develop. Why can't we take all these manmade elements and develop our own nature?"

Artist Morehshin Allahyari ('12 M.F.A.) is able to reconstruct memory with the latest advances in technology.

The Iranian native was stunned in 2015 when she saw a video of the terrorist group ISIS destroying artifacts from the ancient cities of Hatra and Nineveh. After a year of researching the artifacts, she got behind her computer monitor to re-create a dozen of the historical pieces through 3-D printing.

"Watching your idea become physical, layer by layer," she says, "that's an interesting and amazing feeling -- bringing it to the physical world."

Technology has always intrigued Allahyari. As the first graduate student in UNT's new media art program, which combines multiple disciplines with digital forms, she worked with David Stout, professor of composition and new media and coordinator for iARTA.

"I'm very curious about critical approaches to technology," she says. "It has a limitless potential."

An activist and educator, she is especially interested in how technology allows for political archiving and potential social change. Her 3-D modeling and printing project, Material Speculation: ISIS, was a natural extension of her research. In her creations, which include statues of deities such as Lamassu, she inserts a flash drive with images, videos and other data, so as to preserve information about the artifacts and their history for future viewers.

Her other projects include Dark Matter, in which she re-created objects, such as a Barbie doll and VHS tape, that have been banned by the Iranian government. Her works have been featured in exhibitions from Australia to the U.S., and covered in The New York Times, Huffington Post and wired.com, among others. One of the pieces has gone aboard the International Space Station as part of a group of artwork from countries such as China, Iran and North Korea.

She is co-writing a book called The 3-D Additivist Cookbook that will include a manifesto about 3-D printing. Her next project will explore digital colonialism. 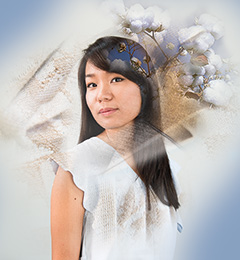 The fragile natural environment inspired Chanjuan Chen's ('15 M.F.A.) work. Chen was a fashion design student in China when she visited her classmates at the clothing factory where they worked. Seeing how garments were made, she was curious about how to reduce fabric waste.

"It made me want to learn about sustainability," Chen says.

She then attended UNT as an international student, and she put her ideas into action by creating eco-friendly fashion designs. Fabric often gets thrown away as pattern pieces are being cut because most garments are curved, not square-shaped.

To prevent waste, Chen created an origami dress in which the initial form used seven rectangular shapes. The outfit, made from organic color grown cotton, also can be worn two different ways, adding to its eco-friendliness.

Chen says she participated in such contests and discovered new methods for creating sustainable designs with encouragement from Marian O'Rourke-Kaplan, associate professor and graduate coordinator for fashion design.

"She has made a huge impact on my study and my career," Chen says.

Now Chen is teaching others environmentally friendly fashion techniques as assistant professor at The Fashion School at Kent State University in Ohio. She has several goals -- to add more Asian culture elements with sustainability efforts to her garments, and to research and write a book about eco-friendly designs.

She's fulfilling a childhood dream, which began when she was making clothes for her Barbie dolls.

"I just really enjoy dressing people and creating new designs," she says. "I had the idea to not just build beautiful clothes, but to help the environment." 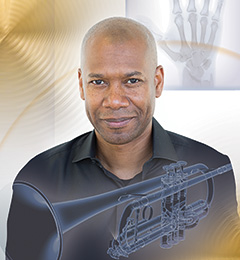 James Ford ('97 M.M., '07 D.M.A.) began playing the trumpet as a child and loved the sound of it. But it wasn't until he came to UNT that he learned the life of a musician could be harmful to one's health. Musicians are prone to all kinds of injury, from hearing loss to focal dystonia, a neurological condition that causes involuntary muscle contractions.

Ford researched the injuries faced by trumpet players while serving as a research assistant for Kris Chesky ('88 M.M.E., '92 Ph.D.), professor of music and medicine, and Leonard Candelaria ('72, '74 M.M.Ed.), now a UNT Professor Emeritus of music teaching at the University of Alabama.

Ford continues to study health issues as a professor of music at California State University in Los Angeles. His research is conducted in conjunction with UNT's Texas Center for Performing Arts Health, co-directed by Chesky and Sajid Surve, associate professor of osteopathic medicine at the UNT Health Science Center in Fort Worth.

The TCPAH seeks to improve the health of performing artists by working with several of UNT's colleges -- music, engineering, and public affairs and community service -- and the Health Science Center's Texas College of Osteopathic Medicine and School of Public Health.

During the UNT trumpet study, researchers designed an apparatus to measure the mouthpiece forces of 23 players. They conducted hearing tests and took measurements for strength. Results of the study show that mouthpiece forces generally changed as a function of increased pitch, loudness and length of performance time.

Ford has had his own successful career as a trumpet player, performing for artists such as Justin Timberlake, Aretha Franklin and Celine Dion. He says the studies merging art and the health sciences have helped him to become a more informed player and he's helping other musicians too.

"One goal of this field is to bring awareness to performers in hopes of preventing performance-related injuries," Ford says, "and give their artistic careers longevity so their music can be enjoyed for a long time."