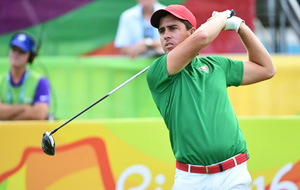 UNT alumni were shining brightly this August at the 2016 Summer Olympics in Rio -- on the golf course and on the radio.

Rodolfo Cazaubon, a former member of the UNT golf team who now plays on the Web.com tour, was the only golfer in the Olympic tournament representing Mexico. Cazaubon, who attended UNT from 2009 to 2013 and won three tournaments his senior year, overcame a rocky start in the opening round at the Olympics to move into a tie for 16th place heading into the final day of competition. He finished in the middle of the 60-player field. Men's golf had not been part of the Olympics since 1904.

And Ted Emrich ('09), formerly with KESN-FM, ESPN Radio in Dallas, was chosen by Westwood One Sports, a radio network, to announce the play-by-play for track and field events in Rio, his third Olympics assignment. He was a general assignment reporter for the 2012 games in London announcing about a dozen sports -- everything from archery and beach volleyball to diving and weightlifting. Then at the 2014 Winter Olympics in Sochi, he covered freestyle skiing, snowboarding and four-man bobsled.

"I always wanted to do play-by-play," says Emrich, who earned his degree in radio, television and film, now media arts, and was a student in the Honors College. "I was drawn to the energy of sports, and I wanted to be the person who could share that with an audience."

Emrich says the track and field competition in Rio was full of "so many iconic moments" -- from the "sheer magnetism" of sprinter Usain Bolt, who won an unprecedented three gold medals in his three events, and Team USA's sweep of the women's sprint hurdles, to the "iron will" of British distance runner Mo Farah, who went on to win gold in the men's 10,000 meter run after falling on the tenth lap.

"I was proud to just witness them, let alone call them," he says, adding that working with NBC Sports commentator Carol Lewis Zilli, a three-time Olympian, "was a blast."

Past UNT Olympians include:

Two past Olympians came to UNT months or years after the closing ceremonies of their games: