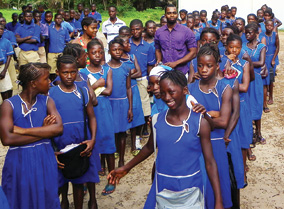 As a 16-year-old in 2000, Alhaji Saccoh ('10) left his family in his native Sierra Leone to flee the nation's civil war. He didn't return to his village, Kalangba, until June 2013, after receiving his bachelor's degree in international studies from UNT and entering graduate school at the University of Pennsylvania. When Saccoh started a summer internship offered in Freetown, Sierra Leone's capital, by the Harvard School of Public Health Research on Children and Global Adversity, he took a trip to Kalangba and his old primary school. He had shipped a barrel of supplies to the school before arriving in Sierra Leone.

"When I saw how much was needed, I was ashamed that what I had bought was so small," he says. "The school didn't have any books and few pens, pencils, notebooks and crayons. The building also needed repairs. The roof leaked whenever it rained, flooding the classrooms and disrupting classes several days a week during the rainy season."

During the same trip, Saccoh visited the National Fire Force in Freetown. He was curious because he had been a volunteer firefighter in Pennsylvania for several years. Saccoh was appalled to learn that firefighters lacked proper protective clothing and fought blazes without wearing fireproof boots, gloves, helmets and coats. Their hoses were worn with holes, and their beds at fire stations were cardboard on the floor.

"Their morale was very bad," he says, adding that the firefighters earned $50 a month and a bag of rice.

Saccoh vowed to collect 40 sets of gently used gear from Philadelphia-area fire departments and ship them to Sierra Leone. His goal was exceeded when donations resulted in more than 200 sets -- sets that Saccoh said will last for years and "give firefighters the respect they deserve." He also raised more than $3,500 from fundraisers to ship the equipment to Sierra Leone. Saccoh's dedication led to his being named "Firefighter of the Year" by the Delaware County, Pennsylvania Firemen's Association last April.

While responding to the needs of the nation's firefighters, Saccoh did not forget his old school. In February 2015, after he received his master's degree in economic development and growth, he founded the Sierra Leone Children's Fund.

The nonprofit organization's goal is to promote rural primary education for the underprivileged children in Kalangba and the neighboring village of Maforay by renovating three schools attended by about 900 students. The fund provides the schools with needed supplies and renovations.

Saccoh directs the Sierra Leone Children's Fund while working as a refugee health coordinator for HIAS Pennsylvania, a legal services office in Philadelphia serving immigrants, refugees and asylum seekers. He points out that Sierra Leone's literacy rate for 15- to 24-year-olds is 30 percent below the world average and 20 percent below the average in the rest of Sub-Saharan Africa.

"The primary school years are the most formidable years for children," he says. "They need to learn to reach for certain levels of education. We hope our work will provide a desirable educational experience for these children."

Saccoh had only seven years of formal education himself before he left Sierra Leone. After graduating from high school, he joined his aunt in Dallas and completed his associate's degree at Richland College before enrolling at UNT.

He says his work with a nonprofit organization as a UNT student prepared him to start Sierra Leone Children's Fund. For more than two years, Saccoh was a volunteer case manager for International Rescue Committee in Dallas. He located and coordinated services for refugees from different countries and their families, tutored them in English and assisted them with cultural adjustment to a new country.

"The experience with International Rescue Committee showed me that I want to give back to other refugees, and also give back to home," says Saccoh, who would like to someday live in Sierra Leone permanently.

He most recently visited Sierra Leone in December with another batch of firefighting equipment, worth more than $50,000, that was donated by departments in Pennsylvania. With a goal of collecting at least $1 million worth of gear, Saccoh hopes to begin a partnership with the Africa Fire Mission, which has provided departments in Ethiopia, Kenya and Zambia with equipment and training to keep their firefighters safe.

He also has many goals for Sierra Leone Children's Fund, including building a small library with required textbooks for the nation's national exams; creating the first school-based clinic, with nurses teaching health education and teen pregnancy prevention; starting a teacher training summer program; and supplying equipment and uniforms for the schools' organized sports teams.

"As a former student, I hope I can give these children opportunities that were never given to me, like a library, a decent classroom or a computer lab," Saccoh says. UNT's program is one of the most prestigious for learning academic English in the U.S.
Top