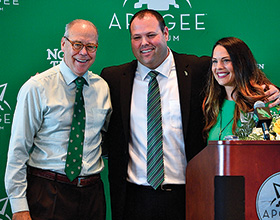 UNT student-athletes and coaches gained a new leader in August when Wren Baker joined the Mean Green as vice president and director of athletics.

"Wren Baker's passion for college sports is unmatched, and he is a proven effective leader with critical experience in hiring coaches, efficiently administering an athletics department, increasing support across the board and taking care of student-athletes," UNT President Neal Smatresk says.

"I consider it a great honor and privilege to join the Mean Green family. I look forward to working with all of our fans and constituents to build an athletics program that will be recognized nationally for competitive excellence and academic achievement," says Baker.

Baker succeeds Rick Villarreal, who stepped down in June after nearly 16 years as UNT's athletic director.

The Mean Green football and tennis programs posted scores in the top 10 percent of their sport on the NCAA's single-year Academic Progress Rate for 2014-15, released this spring.

The football program's score of 993 was its best since the APR began in 2003. Tennis, volleyball and cross country posted perfect scores of 1,000 for the third year in a row. Men's golf scored its second straight 1,000, and track also made a perfect score.

On the APR multi-year report, covering a four-year span, tennis scored a perfect 1,000, followed by volleyball with a 995, and swimming and diving at 991. Football improved for the sixth year, posting a multi-year score of 984 — also its best ever.

The APR metric takes into account eligibility and retention of each student-athlete for each term. The NCAA considers a four-year aggregate score of 900 acceptable for each sport.for the Mean Green at home and away games this football season. For tailgate tent package reservations at home games, call 940-565-2527. Buy season tickets at meangreensports.com and learn about gameday events and festivities at northtexasgameday.com and untalumni.com.