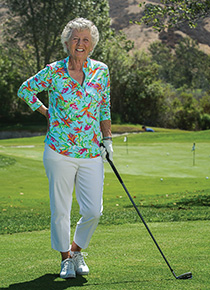 Sandra Palmer ('63) says these days she is just trying not to act her age. At 73, the Ladies Professional Golf Association legend travels as much as she can, teaches golf to all ages, headlines professional golf events and plays on the senior legends tour.

"I want to make a difference by passing on what I know about golf to others," Palmer says. "I've had great success in the game, so I try to show people lessons I've learned. One of the toughest is it's not just about your technique, but how you think."

She started playing more than 60 years ago in rural Maine. Her school bus took her past a golf course every day, and one day, she got off that bus early and walked over to the course. She quickly landed her first job as a caddy for a man who, many years later, saw her win an LPGA tournament in Miami. That was one of 19 tournament wins, including a U.S. Open victory, over her 30-year professional career.

"It took me seven years to win my first tournament," says Palmer, 1975 top money winner and Player of the Year. "But after you win that first one, it just gets easier."

What wasn't always easy was her family life. At 13, Palmer and her mother moved to Fort Worth when her parents divorced. Then she met Vida and Ed Warren, who took her in and raised her as a daughter, fostered her love for golf and encouraged her to attend college. She came to campus in 1959, when there was no women's golf team. But there was a course.

"There were some outstanding male players at the time, like Rives McBee ('63) and Bobby Greenwood ('64)," she says. "We spent every weekend practicing. They both went on to have careers in golf. Guess I taught them a lot, ha!"

Immersing herself in campus life, she was a cheerleader, joined the Green Jackets and was voted Homecoming Queen. As a member of Alpha Delta Pi, she met long-time friend Glenda Adams ('61, '66 M.Ed.).

"Sandra was cute as a bug with a bubbly personality," Adams says. "We've stayed in touch all these years and it's been a pure joy knowing her."

Palmer, who received the university's Distinguished Alumni Award in 1977, says her time on campus was some of the most fun she's ever had and credits her teachers and classes for helping to chart her path.

"I learned a lot -- discipline, determination and all those things you need in the world to succeed," she says.

Palmer earned her degree in physical education and taught high school P.E. in Arlington for a year before joining the LPGA Tour in 1964.

"Playing golf professionally is a very special thing, but I'm also very proud of my diploma," Palmer says. "I'm the first one in my immediate family to earn a degree."

She also has earned a reputation as an inspiring mentor and advocate for women's golf. Former LPGA player Shirley Furlong says she wanted to be a golfer after seeing Palmer on TV in a 1975 tournament.

"On the tour, she was a fierce competitor but still gave me guidance when I struggled with my game," Furlong says, adding that it's fitting Palmer was a college cheerleader.

"She has your back and makes you feel like she is your biggest fan," she says.

Palmer says her friends from the LPGA and UNT are like family.

"I can hardly remember what I did yesterday," she says. "But I will always remember all my friends."

Favorite pastimes:
I love to travel. This summer I spent a few weeks in Colorado with my sorority sister Glenda Adams ('61, '66 M.Ed.). I'm also still working on my golf game. I love to practice.

Favorite campus memories:
I was really shy, so it's hard to believe I tried out for cheerleader. My sorority sister Libby Schlittler ('63) encouraged me to try out and taught me to cheer. We both made it! That was the most fun ever. I remember being in the Green Jackets service organization, wearing a uniform and carrying a box of candy around. And I was Homecoming Queen one year. I have no idea how I received that honor. I guess if you just put your face out there enough, they'll give it to you.

Pursuing a golf career:
It is quite a commitment. It is total dedication. You have to be able to accept the highs and the lows. Believe me there are many. It's a battle every day to stay positive and to have unwavering belief in yourself. Also, you always have to remember that sports don't last forever and you need to know what's next in your life.

Advice for success:
Surround yourself with positive people, pick a career you are good at, and look forward to getting up every day and accomplishing your goals.