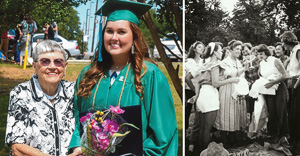 This spring, I had the honor of attending my granddaughter Lauren's graduation ceremony at UNT, where she received her bachelor's degree in rehabilitation studies -- 66 years after I received my bachelor's in physical education from what was then North Texas State College. The campus has really grown, but the visit brought my own college days to mind.

Denton was a long way from my home in Edinburg when I began planning to go to college. I graduated from high school in 1946. My mother wanted me to go to Southwest Texas State College in San Marcos because it was closer, but my decision was North Texas. It was one of the best I ever made.

I always rode a bus from Edinburg to Denton, which took about 15 to 18 hours, depending on the layover. On one trip it was so crowded I had to stand all the way to Dallas. At Easter, I would work as a volunteer in the office of the dean of women, Dr. Imogene Bentley, because it was too far and expensive to go home. 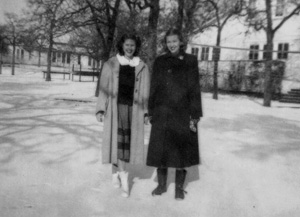 I enjoyed every day I attended. At orientation we were told to always say "howdy," "hello" or just speak when you would meet someone walking. I think the students really enjoyed that. The Saturday Night Stage Shows and the dances at the country club every Wednesday were great. 'Fessor and the Aces were at their best.

We always went to the Student Union Building to socialize, square dance, listen to someone playing the piano, get a cold drink and pick up our mail. Lauren took us on a tour this spring that included the new University Union. It's beautiful.

Bruce Hall has not seemed to change that much, except it had no air conditioning when I lived there and the cafeteria is larger. We ate all of our meals there except the Sunday evening meal. We ate very few snacks, almost none, and stayed slim and trim. We also played a lot of tennis on the courts across the street and volleyball and basketball in and around the Harriss Gym.

When it snowed -- the first time I'd ever seen snow -- our house mother, Ms. Maudie Russell, would cut up a cardboard box and my roommates and I would go sliding on any elevation we could find.

The cost to go to school each semester was $40, but that was a large sum for us and I had to pay my own way. When I was in high school in Edinburg, I saved money from several different jobs so that I could attend college someday. I was a cashier at a 5 and 10 cent store; ushered, popped popcorn and sold candy at a movie theater; and served meals to teachers. I also worked as a switchboard operator for Southwestern Bell Telephone Co., when we said "Number, please," and "Long distance." At that job I made $38 a week, gave my parents $5 for food and saved what was left after I paid for personal expenses.

After my junior year at North Texas, I made a decision to go home, get a job and make some money so I could complete my education. Instead, Ms. Russell offered me a job at the dorm. As hostess, I had to see that all the girls were in their rooms and safe by 11 p.m. I also worked the front desk as a receptionist and switchboard operator. This paid for my room and board, and it motivated me to work hard and graduate.

It was all worth it because I had so many excellent teachers. Beulah Harriss, sponsor of Delta Psi Kappa, the honorary society for physical education students, was one of my favorites. And every day when I left a classroom, I felt like I had learned something new.

My parents did not come for my graduation in 1950 because it was so far, but my sister Irene was able to attend and it was a real thrill to have her there. After graduation, she and I rode the bus back to Edinburg. I was 19 years old.

I have had a beautiful teaching and academic counseling career, thanks to the teachers who made it all possible and to UNT for providing me with this great opportunity in life. I will always be grateful -- and proud that my granddaughter and I share an alma mater.

Milligan, who also earned a master's degree from the University of Texas-Rio Grande Valley, was a high school teacher and counselor in Edinburg and Hidalgo for more than 40 years. She and her husband, Bill, celebrated their 65th wedding anniversary this fall. Her nephew, Nicky Labus ('74), also is an alum. And her granddaughter Lauren ('16) began work on her UNT master's degree in rehabilitation counseling this fall.