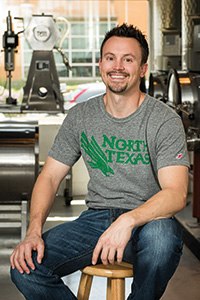 Every summer, the West Texas sun heats the dry Chihuahuan Desert to blistering temperatures. Not many plants can survive in a desert climate, let alone thrive. But as temperatures warm above 100 degrees in Alpine, rows and rows of grapes at Cathedral Mountain Vineyard begin developing perfect amounts of sugar and strong shades of green and purple. As the sun sets around the Davis and Chisos mountains, temperatures can drop more than 30 degrees through the night. The vineyard and the volcanic rocks under the desert soil begin cooling, nourishing acids in the grapes, which will soon be made into wine.

U.S. consumers today are more interested than ever in finding home-grown flavors and supporting local wineries and brewers. Last year, the wine industry had a 14 percent growth in fine wine sales, according to an annual State of the Wine Industry report by the Silicon Valley Bank. And the Brewers Association reports that craft brewers saw a 13 percent increase in sales.

As a student in UNT's College of Merchandising, Hospitality and Tourism, Walker studied the beverage industry by day and worked full time at a Grapevine winery at night. There he learned about equipment, fermentation and production.

"I went from apprentice winemaker to production manager to winemaker in two years," he says.

After graduation Walker moved to California, where he worked as an assistant wine buyer, soaking in the business and retail side of the industry. He also spent time learning about labels, wineries and vintages, building up sommelier-level wine knowledge. A year later, Times Ten Cellars, a winery with restaurant locations in Fort Worth and Dallas, offered him a chance to come back to Texas and to tap his passion for the local growing industry.

"Younger people who have been exposed to global cultures through technology and travel are developing an interest in wine earlier in life than past generations," he says. "Wine culture is constantly changing." 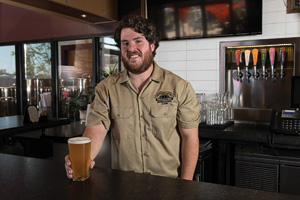 Matt Reynolds ('11) studied mechanical and energy engineering in UNT's College of Engineering. In classes and labs at Discovery Park, he learned about the mechanics of heating and cooling. He also learned problem-solving skills and techniques for building and operating machinery. In his spare time, Reynolds researched the huge variety of craft beers, how to brew them, and the plethora of ingredients that can be used in beer recipes.

He became so interested that after graduating and starting a job as a mechanical engineer at CBS ArcSafe, he bought a home brewing kit with his first paycheck.

"There is a lot of science in beer," says Reynolds, who now is head brewer at Malai Kitchen, a restaurant featuring Asian-fusion flavors in food and beer with locations in Dallas and Southlake."Brewing is a practical application for my engineering background. It gives me a chance to focus on problem solving and building things, and it requires being crafty."

Because Malai Kitchen has given Reynolds full control over the restaurant's local brews, he also is able to explore a creative side of the industry -- flavors.

"The process side of making beer is very mechanical, but the recipes side is artistic," he says. "It's a wonderful combination of culinary arts and science. I get to play with new ingredients and find flavor balances that are brand new." 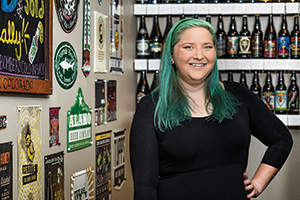 In 2014, Cristall Heisch ('10) and her husband, Austin Heisch ('09), road tripped through New England for their honeymoon. They stopped to take a break in a small New Hampshire town and came across the smallest brew pub they had ever seen. It was so small that only a handful of people could fit inside at a time.

"After we came back home I had an epiphany," she says. "I decided I was going to open a small bottle shop where I could sell great craft beers, and about a year later I was in business."

Today Cristall, who earned her degree in geography, is the owner of The Sleepy Panther Bottle Shop in Fort Worth's eclectic Near Southside neighborhood. The shop, just 200 square feet, includes three coolers of ice cold American craft beers. And Austin, who as an Honors College student studied English and German, is a brewer for Rahr & Sons Brewing Co. in Fort Worth.

"I still remember my first craft beer," Cristall says. "I had a Harpoon IPA Pint Night at Lucky Lou's in Denton. It was the first time I'd ever tasted amazing flavors in a beer and when I realized beer could be an experience itself." 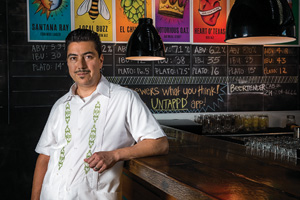 Esquivel, who co-founded Four Corners Brewing Co. in 2012, attributes the industry's popularity to an overall shift consumers have made toward supporting local foods and wanting to know more about the products and brands they support.

"People want to know where ingredients are sourced, if they've been responsibly grown, if their foods have preservatives, and who makes their food," Esquivel says. "It's a swing away from a past era of mass production and a shift toward being more engaged."

He studied advertising at UNT and worked closely with the late Jim Albright, an associate professor who was a pioneer in food advertising and is credited with conceiving the brand name "Funyuns."

"Dr. Albright taught me a lot about the importance of creativity and storytelling," Esquivel says. "He was a great mentor."

After graduating, Esquivel went on to work in advertising with clients like ConAgra and Nestle and later moved toward marketing consumer packaged goods, where he worked with Mission Foods, Dannon and Borden Dairy.

In 2010, he and two friends -- avid home brewers -- saw an opportunity to fill a craft beer cultural gap in the North Texas market. They put together a business plan and took the next step.

"Customers want to hear and read stories about the types of hops we use, our methods," Esquivel says, "and they want to learn what gives our beers character."

He and his partners are now moving their West Dallas business to a larger facility in South Dallas, to keep growing and to share their story with more people.

"The emotional engagement level in craft beer is very high," he says, adding that it's vital to the industry's success. "People build connections with breweries and they identify with the philosophy and stories behind craft brands."