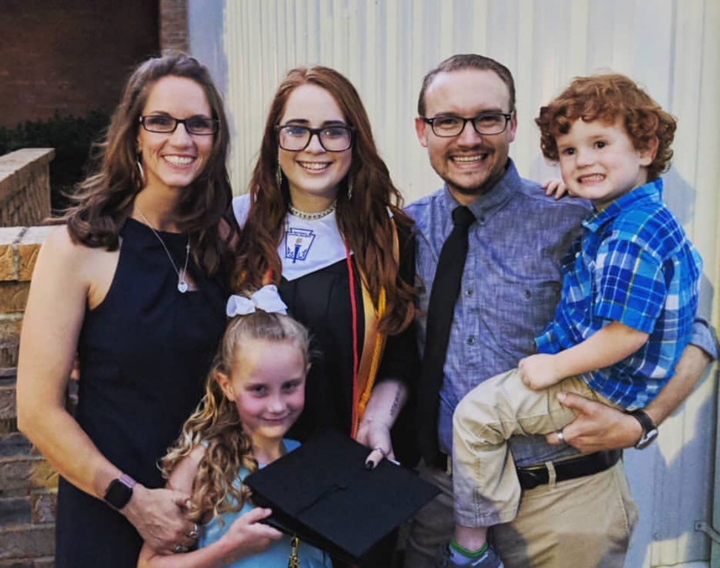 After nearly two and a half years in the foster care system, freshman Shayna Russo was adopted by a family in Itasca. Russo decided to share the happy news on Twitter and received an outpouring of support from her future UNT family.

“Everyone at UNT is so nice,” says Russo. “The Twitter community was so supportive and it made me really excited to actually be in college.”

Russo was born in Massachusetts where she lived with her dad, mom and twin brother. After her mom passed away from breast cancer, she moved with her family to Aledo, where her dad married his high school sweetheart.

As she got older she began to experience physical and mental abuse in her household.

“Sometimes I went without food,” says Russo. “I lied to CPS about what was going on because I was scared that no one would believe me.”

She was also placed in a plethora of group homes and residential treatment centers.

“I was on about 20 or more different psychotropic medications for issues that I never had,” says Russo. “It really messed with my body.”

At 16, Russo lived for a time in the Presbyterian Children’s Home and Services, which is where she met her adoptive parents, Christen and Andrew Rogers.

After spending four months in the group home, Russo was pulled out by her parents and moved back to Aledo. Although she was back home, she wasn’t allowed to go to school with her parents’ “other kids,” so she was placed in the Aledo Learning Center, a branch of Aledo High School that provides assistance to students in danger of dropping out or who have credits that need to be recovered.

“When I got back the abuse got worse,” says Russo. “I had to sleep outside on rocks most of the time and I was lucky if I got a blanket or pillow.”

The Learning Center began to figure out that something was going on. They provided Russo with a prepaid cell phone that she could use if she was in trouble. Once her stepmom found out about the phone they got into a big argument and her dad took her to CPS the next day.

“My final words to him were, ‘you’re going to regret this someday,’” says Russo.

After being placed into the care of CPS, Russo was able to go back to the same group home in Itasca. During her time there, the Rogers asked her if she would like to be adopted. She was able to go through the adult adoption process and was adopted on July 17, 2018.

After graduating in the top 25 percent of her class, becoming a member of the National Honor Society and landing about $10,000 in external scholarships, Russo decided to attend UNT.

“Learning has been an escape and coping skill for me,” says Russo. “Before my mom passed, she instilled in me how important college was. So I knew that it was something that I had to do.”

Russo plans to major in Communications and wants to inspire others who might be going through experiences like hers.

“For those that might be in a situation like mine, just remember to speak up for yourself, stay strong and know that there will always be a tomorrow.”