College of Music graduates hone their craft with entrepreneurial spirit.

She and Barrette have found creative ways to earn a living from the calling they love with help from one of UNT's newest programs. Other alumni, too, have built successful businesses -- providing online music lessons, organizing jazz band master classes for amateur musicians, creating new media experiences for 18th century music -- to share their craft in a profitable way.

The College of Music, already one of the most prestigious institutions in the nation and the world for producing high-caliber musicians from classical to jazz, recognized the need for its students to know how to promote themselves as musicians. Two years ago, the college -- recently named as one of the top 15 music business schools in the nation by Billboard magazine -- established the Career Development and Entrepreneurship in Music program. It offers classes geared toward running a business, competitions to encourage entrepreneurial ideas and other resources to help music students market themselves.

"You can think all day about a great idea for a business, but at some point you have to start doing," Guzmán says. "The music entrepreneurship program has given me real-life skills to put into practice and taught me that you just have to go for it."

The workday for Barrette is filled with opportunities to help musicians with their prized possessions, from repairing a 150-year-old saxophone to appraising a family heirloom. Clients range from local public school students to professional musicians who travel from as far away as Lubbock, San Antonio and Oklahoma to visit the shop.

Barrette took instrument repair classes and worked in repair shops while he was studying for his master's in saxophone performance at UNT and then in Michigan and in his own shop in Boston after he graduated. He always wished Denton had a place for wind musicians to try out mouthpieces and ligatures. He and Guzmán dreamed up the concept for TB Winds as students, and in 2017 the opportunity came for a shop in a loft space on the downtown square. They signed the lease in about two weeks and opened two months later.

"We've learned so much in our first year," Barrette says, adding that UNT courses Guzmán took, with lessons such as how to write a business plan and pitch ideas, helped get TB Winds off the ground.

Guzmán also proposed an idea for an organization -- in which musicians perform in Denton nursing homes -- at the College of Business' Westheimer New Venture Competition and at the inaugural Music Entrepreneurship Competition in 2017. That's when she was hired by Texas Winds Musical Outreach, which brings musicians to play at nursing homes, hospitals and preschools, and she helped expand the organization's outreach as Denton County program director. In her first year, she booked 41 concerts that reached more than 1,000 seniors.

"This industry is ever-changing," says Fabiana Claure, the music entrepreneurship program's director, who says the best time to start a music business is as a student. "The program helps students develop an entrepreneurial mindset to build financially sustainable and professionally satisfying arts careers that positively impact their communities."

Guzmán, the program's first teaching fellow, dispenses the lessons she's learned by teaching an undergraduate class in career development at UNT. And she and Barrette seek advice and feedback from their community to ensure their shop is serving its needs. They belong to the Denton Main Street Association and Stoke, a coworking group in downtown Denton, and often survey private lesson and public school teachers.

"Just do it and ask for help along the way," Barrette says. "You're never going to be successful if you don't try." 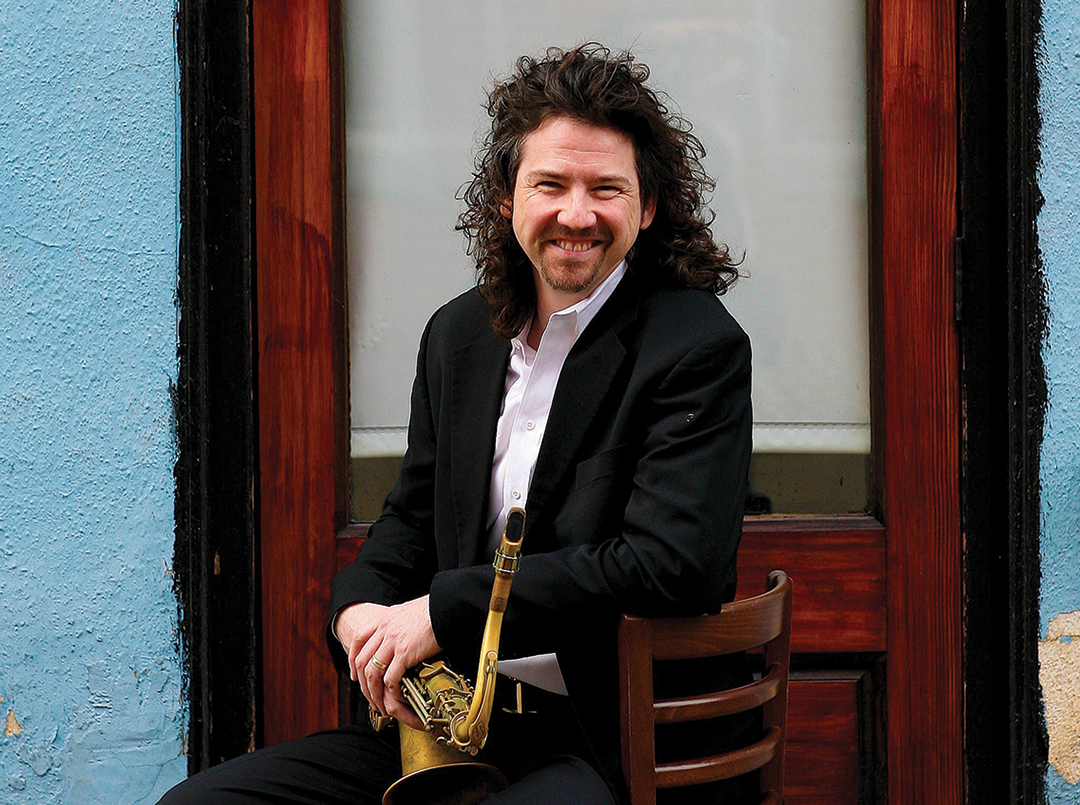 Even before the music entrepreneurship program launched, alumni have been drawing on lessons from their days in the classroom to create their own businesses that fill specific needs. Jeff Antoniuk ('90, '92 M.M.) found such a niche when he was teaching music lessons to his adult students, who ranged from knowledgeable musicians to semi-pros, almost all with day jobs. He noticed they didn't have anyone to perform with.

"The reality is, there's nothing set up for these adult students," he says.

So the Annapolis, Maryland-based saxophonist put them together in small group jazz ensembles and taught group lessons, similar to the combo lessons he took from Dan Haerle ('66), Professor Emeritus of music, as a jazz studies student. Antoniuk calls the company Jazz Band Masterclass, and it now boasts 120 students in 16 bands that play everything from Brazilian jazz to Duke Ellington-inspired music.

He also founded the Maryland Summer Jazz camp 14 years ago when he saw no such programs for adults. And recently he launched Jazzwire.net, a subscription-based website that connects musicians from around the world through curated content, Facebook-like group board discussions and personalized feedback on their playing.

Antoniuk, who spoke at the College of Music's entrepreneurship classes in 2016, also is coaching other musicians to set up similar businesses, with the goal of training 40 jazz pros in 40 cities. One of those is former classmate Russ Nolan ('91), who established JazzLabNY in the New York Tri-State area.

"The fun part of teaching adults," Antoniuk says, "is knowing that I'm bringing music back into people's lives."

As a member of the alternative rock band Fallen From the Nest, Taylor Robinson ('05) thought he hit it big when the group signed with a major label.

In between tour stops in 2006, he taught guitar, piano and voice to earn more money. Now his company, Taylor Robinson Music Lessons, has grown to one of the largest providers of music lessons in the U.S., with more than 2,500 studio locations nationwide.

"I was surprised to find a lot of creative fulfillment in building a business," he says.

Robinson's company takes care of the scheduling and finances while the musicians conduct the lessons. His philosophy for the lessons -- and the company's motto, "Learn to Play From the Heart" -- stems from a modern music history class he took at UNT. In the class that covered music from the last 100 years, he realized music didn't have to be classical or jazz to be worthy of respect, and he began incorporating modern music instead of classic drills or "Three Blind Mice."

"The students couldn't get enough," he says. "It helped them stick with their instruments longer, pleasing parents, who then recommended us to friends and family."

As Robinson, who lives in Dallas and Charlottesville, Virginia, was expanding his business to 350 instructors in 2010, he enrolled in UNT's M.B.A. program to learn more about accounting, metrics and advertising. His business now boasts 20 employees, 14,000 teachers and 50,000 students and was featured on the reality TV show Shark Tank.

He's also making innovations, such as the One Click WebCam, a browser similar to Skype that allows online music lessons and incorporates tools such as tuners and metronomes. The WebCam was nominated for an award in 2017 by the National Association of Music Merchandisers.

When doctoral music student Julianna Emanski ('11 M.M.) arrived in Texas from Seattle, she knew she wanted to create something that served the community. When the College of Music added a new music entrepreneurship program, she took full advantage.

After her first year in the program, the Frisco-based vocalist launched Lumedia Musicworks with violinist Stephanie Raby ('11) and cellist Christopher Phillpott. The nonprofit presents 18th century music through concerts, videos and collaborations with other music groups and is the only nonprofit Baroque ensemble in the world specializing in cinematic music video season releases alongside creative live concert experiences.

"The music entrepreneurship program gave me the confidence to launch," Emanski says, adding that classical music can be designed more like pop music by breaking up movements into two- to three-minute pieces, about the length of a pop song. "We created something that fits with the digital culture so people would better understand the music," she says.

Lumedia Musicworks' past concerts include "Wonder Women," a tribute to women performers and composers who lived from 1200 to 1700. The group's first collaboration featured eight musicians playing in the commemoration of the 500th anniversary of the German Reformation sponsored by The Anglican Oratory Culture Series in Rockwall. And for a video, Lumedia Musicworks created a vision of Purcell's Symphony V from the opera King Arthur.

Emanski eventually hopes to create educational content for arts nonprofits and start a summer Baroque music festival and music performance institute in Dallas. She says running the business presents its challenges -- such as last-minute scheduling of performances requiring a quick rehearsal time -- but the entrepreneurship classes helped her acquire a skill set needed for success. She's also been able to connect with others. Two of her classmates, Drew Sutherland, a doctoral student in trombone performance, and Kyle McKay ('18 M.M.), are now part of Lumedia.

"My classes led to not just talking about creating something, but actually making it happen." Emanski says. "When you see your peers creating their own businesses and organizations in the community, it causes you to start thinking outside the box. You suddenly have this desire to create new things, too. It's a domino effect."

Read how John Leadbetter ('08), who played saxophone with the One O'Clock Lab Band as a student, launched a saxophone shop in New York City that now attracts members of the Saturday Night Live band, the Vanguard Big Band and smooth jazz artist Najee. And learn more about UNT's music entrepreneurship program.