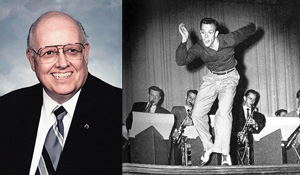 When I recieved the Texas Tap Legend Award from the Dance Council of North Texas in October, I could not reflect on the importance of the award without thinking of ’Fessor Floyd Graham.

So let us begin this tale of those wild college days I so enjoyed.

My tap dancing career and work as a professional entertainer in the Dallas-Fort Worth area began several years before ’Fessor introduced me to campus as the “Boy With the Flying Feet.” I had been performing in nightclubs and working with vaudevillians since the age of 14. By age 17, I had performed in 33 Dallas Summer Musicals.

’Fessor Graham influenced many young entertainers to attend North Texas. He would bring his traveling shows to area events and high schools and always asked to have students perform. He spotted me when my high school principal suggested I dance.

’Fessor liked what he saw and invited me to perform on the Saturday Night Stage Show on campus. I accepted and the audience approved. ’Fessor told me that if I attended North Texas, he would arrange a scholarship.

I performed in the Saturday night shows about every three weeks. I also directed dancers and chorus numbers and staged various productions. I taught tap dancing to the advanced physical education class and staged dances for the opera program. I often went to Dallas to work nightclubs and television shows. I had no car, so the late-late bus was the only way back to campus.

North Texas provided a multitude of fun activities for its students. Sometimes I wonder how I graduated. One of the activity highlights was when ’Fessor and the Aces of Collegeland played for the Wednesday night dances for the student body, free of charge.

I lived in Chilton Hall (ramp 6) and quarterbacked the intramural champion flag football team. I joined a new frater­nity, Phi Alpha Tau, which later became the national fraternity Sigma Phi Epsilon. These young men included writers, future doctors, artists, musicians, and some very successful military and businessmen. All were top students, and then there was the strange dancer.

I graduated in August 1951 and was the first in my fraternity drafted into the U.S. Army during the Korean War. While in the Army, I accidentally met my fraternity brother, drummer Jack Rumbley (’51, ’52 M.M.Ed.), and we performed together in a number of military shows. At ’Fessor’s request, my last campus performance as the “Boy With the Flying Feet” was at a Saturday night show while I was on leave.

While attached to special services in the Army as an entertainer, I performed in 190 shows. After the military, it was off to new adventures in Hollywood and New York. My education degree and teacher’s and superintendent’s/principal’s certificates proved helpful when I taught dance — with a career-high 110 gold medal winners — and in staging numbers for the 2000 Australian Olympics.

Had it not been for ’Fessor Graham’s love, patience, laughter and foresight, I might never have had so many opportunities or received this award. He had a fantastic influence on my future.

After his Army days, Gene Pflug became a regular on the Eddie Cantor Comedy Theatre TV show and appeared in other productions. As the era of studio musicals ended, he stopped dancing professionally at age 28. In addition to a long career in insurance, he taught dance as a hobby at Gingham Girl Studios and later at Calico Kids in Garland.