efore fame and success, they were roommates, fraternity brothers and classmates learning how to navigate through life as college students.

More than a decade after graduating from UNT, that’s still how members of the Eli Young Band see themselves.

Chris Thompson (’04), Jon Jones (’04), James Young (’02) and Mike Eli (’04) make up the successful country music band whose roots began on UNT’s campus. Today, their career achievements include nominations for five Academy of Country Music awards. This year, the single “Crazy Girl” off the 2011 album Life at Best  won Song of the Year, also earning a nomination for Single of the Year, and the band was nominated for Vocal Group of the Year.

The four bandmates catapulted from playing for friends and family in Denton venues to playing before sold-out crowds drawn to their unique sound of heartland rock and Texas country music. That sound came from years of playing together in their dorm rooms and even a summer outside Kerr Hall for Freshman Orientation.

“We were encouraged to think outside the box at UNT,” Eli says. “And we’ve applied that thinking to real life.”

The camaraderie among members of the Eli Young Band is shared by other UNT alumni who credit their alma mater with helping them to think critically, solve problems and use their degrees in innovative ways to go into business for themselves. Amidst the knowledge and opportunity they received at UNT, these entrepreneurs drew inspiration and built lasting friendships that fuel their creativity and are making an impact not only in the region and state, but across the nation.

Jeffrey (’92, ’92 M.S.) and Jamie Benson (’96, ’96 M.S.), founders of the first Movie Taverns in the Dallas-Fort Worth area, are creating new entertainment and movie concepts throughout the state. David Lee (’91 M.Ed., ’02 Ph.D.) and Alan Wimberley (’10 Ph.D.) are bringing a fresh approach to education through their innovative chain of charter schools. And Tim Sommers (’98) and Eric Baumgart are cleaning up communities one tire dump at a time with their environmental cleanup company, Trident Environmental Resource Consulting LLC.

“UNT is a place that provides students with a transformative education that enables them to reach their full potential,” UNT President V. Lane Rawlins says. “We want to be a resource for our students and alumni by giving them the options, the opportunities and most of all the support and the skills they need to pursue their dreams.”

Members of the Eli Young Band say they found that supportive environment at UNT after meeting on campus their first year as students. Involved in Greek life, they learned about self-governance and leadership skills, as well as social opportunities and the chance to make lasting friendships.

“We became pledge brothers,” says Thompson, who majored in philosophy and religion studies.

Despite earning their degrees in disciplines other than music, all four of the bandmates were keenly aware of the music culture and stellar reputation of UNT’s College of Music, says Jones, who started out as a music major but earned his degree in psychology.

“The music program brought me to UNT,” he says. “UNT does a good job of balancing being a big university with a great music culture.”

Honing their musical sound, the four found success in 2003, when they headlined for country music artist Miranda Lambert, catching the attention of a Carnival Recording music executive.

“In college, we were trying to get by and finish school, hoping this music thing would take off,” says Young, the band’s guitarist, who earned his degree in applied arts and sciences. “And the songs we wrote dealt with those issues.”

A business administration and marketing major, Eli says his degree and involvement in the NT40 student leadership organization gave him the leadership skills and business sense he needed to work in the music industry.

“While being creative and making music, you also must have a practical sense,” he says. “Because at the end of the day, this is a business.”

In 1998, Jeffrey and Jamie Benson were on their honeymoon when they secured their first business loan to open a movie theater in Granbury. The two had connected during a Beta Alpha Psi Business Honor Society meeting at UNT three years earlier. Jamie was attending the meeting as a student and Jeffrey as an alumni recruiter for his employer.

It was during their courtship that Jeffrey was bitten by the entrepreneurial bug. Jamie maintained her day job as an accountant until getting the theater up and running. Their first venture proved to be a success and the Bensons say their accounting degrees from UNT helped them along the way.

“We included on our resumes in the first loan application that we had passed the CPA exam on our first try,” Jamie says. “The banker was so impressed that he approved the loan.”

Taking the movie concept to a new level, the Bensons brainstormed the first Movie Tavern, a chain of movie eateries mixing movies with food and cocktails. They opened their first location in Fort Worth in 2001, followed with more across the Dallas-Fort Worth area.

Their success in the movie theater business and networking through UNT led them to former Cinemark executive and UNT alumnus Steve Holmes (’80), who in 2005 helped to put together a partnership between Cinemark’s CEO and the Bensons to open Movie Taverns nationwide.

“We were opening theaters like crazy,” Jeffrey says, adding that they took the opportunity to sell their interest at the company’s peak. “The Movie Tavern was a 98-screen operation in 12 complexes in five states.”

Today, the Bensons are developing a new brand of theaters, Cinergy Cinemas. Jamie is the company’s vice president and Jeffrey serves as president and chief executive officer.

Their new theater concept takes their original movie business to new heights, offering family entertainment, including laser tag, putt-putt golf, go carts and arcades. They have locations in Copperas Cove and Corsicana and another planned for Midland, which will have a 69-foot movie screen, one of the largest in Texas.

“We try and set ourselves apart from the competition,” Jeffrey says.

The Bensons and Holmes, who is now chief financial officer for Dallas-based Starplex Cinemas, stay connected to UNT through the College of Business advisory board, which is dedicated to helping future entrepreneurs with resources and support.

UNT’s Professional Leadership Program also brings together the business college and corporate sponsors throughout the Dallas-Fort Worth area to expose students to the corporate world. And UNT’s Murphy Center for Entrepreneurship supports the entrepreneurial dreams of students through academic programs and its New Venture Creation Contest.

“Our students are the reason we exist and these programs and centers ensure they are provided with the knowledge and opportunities needed to be entrepreneurs,” says Finley Graves, dean of the College of Business.

“Our partnerships with businesses and community groups are created not only to assist students, but also to build meaningful relationships that make our region stronger.”

UNT isn’t just about infusing students with an innovative entrepreneurial spirit. The university’s institutional reputation as a leader in environmental stewardship encourages students and alumni to practice sustainable living. Alumni Tim Sommers and Eric Baumgart are meeting this challenge head-on through Trident Environmental Resource Consulting LLC, or TERC, the environmental cleanup company they founded in 2007.

The “full-service, zero-landfill” company works directly for state and local environmental agencies and property owners, processing and removing scrap tire material from illegal tire dumps — eliminating sources of environmental threats such as fire and mosquitoes in the process.

Unlike most other companies, Sommers says, TERC then sells the materials as an alternative fuel source rather than sending them to a landfill.

“We’re not just tire guys. We look at the big picture,” he says. “We believe our efforts not only prevent potential environmental catastrophes, but also help reduce dependence on fossil fuels.”

Their company is the result of their friendship, which began when the two Sigma Phi Epsilon brothers met as juniors in 1997. Sommers first got the idea to start the business while serving as a naval officer in Djibouti, Africa. He pitched the idea to Baumgart thousands of miles away and the idea “quickly became a reality.”

With more than 12 years of experience as small business owners, the two have learned to draw from each other’s talents to keep TERC thriving.

“Tim’s the creative one and he knows how to sell the company in terms of marketing,” says Baumgart, TERC’s vice president of finance. “My background is business and my family has owned businesses for years, so it was natural for me to handle the finances.”

Sommers, president and head of operations at TERC, says his passion for cleaning up the environment began when he was a student at UNT, where he majored in kinesiology. He worked with “Keep Denton Beautiful” as his fraternity’s community service chair.

“We organized a tree planting and set up recycling boxes at the Sigma Phi Epsilon house,” he says.

Today, TERC cleans up sites across the state. Sommers and Baumgart estimate that since its founding, the company has removed 4 million tires from the waste stream at an average of 2,000 tires a day. They are proud of their growing business, which contracts with local unemployment offices for the labor needed at new sites.

“It’s great being able to give people an opportunity to provide for their families,” Sommers says. “It’s rewarding work for all of us.” 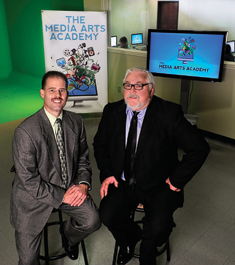 Both say UNT and professors in the College of Education helped shape them into the education professionals and leaders they are today.

“UNT did an excellent job of teaching me that it’s really the child that matters in education,” says Wimberley, who has remained close with many of his professors, including his mentor John Brooks, senior lecturer in educational administration.

Wimberley, who teaches as an adjunct professor at UNT, has been with the charter school district for 10 years. It was the friendships he’s maintained with UNT professors that connected him with Lee, who joined Responsive Education Solutions a year after Wimberley.

“Dr. Wimberley’s character, the UNT connection and the vision of the company sold me on joining,” says Lee, regional superintendent for Responsive Education Solutions who oversees eight schools in the district.

Wimberley points to the district’s Media Arts Academy, an iSchool in Lewisville, as a shining example of how students study their core subjects in personalized settings.

“Instead of a lecture setting, kids in the cohort use our curriculum designed for children to control their own learning,” he says.

Wimberley and Lee continue to solve problems in new ways. Reminded of their UNT educations, they hope to expand their business model to develop early college high schools on college campuses, giving high school students a step up.

“We want to help students see past high school,” Lee says, “toward their future and the next generation of entrepreneurs.”

For the members of the Eli Young Band, taking their music to the next level includes returning to where they got their start. In March, the band’s 23-city “Keep on Dreamin’ Tour” made stops in Houston, Nacogdoches and Austin, Thompson’s current hometown.

“We love coming back to Texas,” Jones says. “This is the region that made us who we are.”