Read about the Honors College commitment to excellence

Find out more about Honors College alumni and their work. 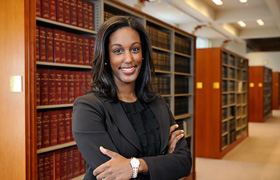 Aïda Wondwessen (’07) enrolled at UNT to pursue her dream of becoming a lawyer. She knew that being part of the Honors College would make her a stronger candidate for law school, but she discovered more.

“I became part of a community of students who were working toward the common goal of going to graduate school,” she says. “And I got to know my professors.”

Wondwessen’s Honors classes were discussion-based, which she says are very similar to the Socratic method-based courses in law school. She also gained experience in research, writing about the Patriot Act and Guantanamo Bay detainees for her Honors thesis while working with mentor Wendy Watson, then an assistant professor of political science and now an instructor in undergraduate studies.

“The Honors research class walked me through the process of developing a topic, finding research materials and organizing a paper over an academic year,” Wondwessen says. “As a result, I was familiar with databases and other sources used in law school when I was still an undergraduate.”

After earning her UNT degree in political science, Wondwessen earned her law degree from SMU in 2010. She now specializes in bankruptcy law as an associate at corporate law firm Winstead PC.

Learning a ‘way of life’

Promoting academic excellence and encouraging talented undergraduates to achieve and prepare for graduate school, careers and lifelong learning has been the goal of the Honors College since it began as the University Honors Program in fall 1994.

The program became a full college in 2005. Today, with more than 1,300 students, the Honors College is the largest in the Dallas-Fort Worth area and offers nearly 50 specially designed courses per semester for Honors students in all majors to satisfy the core curriculum requirements for their bachelor’s degrees. Honors students also may participate in the Honors Research Track, taking courses to learn research techniques, conduct research projects and write Honors theses under the guidance of faculty mentors.

The college also offers sessions about graduate and professional schools and discussions with deans and faculty. Some of the activities take place in UNT’s Honors Hall, a residence hall designated exclusively for Honors students, with the hall’s faculty scholar-in-residence.

The Honors College is a community of like-minded, high-achieving students who have similar academic and intellectual goals. Priscilla Ybarra (’97) says discussions in her Honors classes often continued during breaks or after class. She enjoyed having the same students in many of her Honors classes, which was similar to what she experienced at her small high school in Keene.

“The Honors classes were an instant community for me,” says Ybarra, now an assistant professor of English at UNT.

“All of my classmates were hardworking, interested in the subjects and materials presented in class and just excited to be learning — like me.” 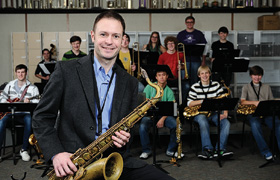 Likewise, David Lown (’00, ’03 M.M.), a serious music student who came to UNT from Harrisonburg, Va., with a goal to play in the One O’Clock Lab Band, at first didn’t think he would enjoy his non-music classes. But he says his core curriculum Honors classes became fascinating because of his fellow classmates and professors.

“The instructors are such great examples of high-quality teachers,” says Lown, now director of the jazz program at Southlake’s Carroll High School. “They have a knack for making the subject engaging and trusting students enough to allow them to decide the direction of discussions.”

While the heart of the Honors College is the classroom, Cox says, the college’s Research Track sets it apart from honors programs at other universities.

“UNT’s Honors College provides funds for students to present their original research at professional meetings and for publication in the college’s journal, The Eagle Feather,” Cox says, adding that the publication, which showcases interdisciplinary undergraduate research, has attracted attention from scholars across the U.S. 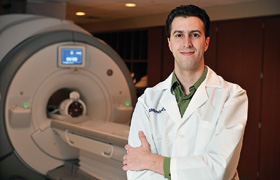 “It gave me a better understanding of what research is and kicked off my curiosity,” he says.

For his Honors thesis, Bosca researched the process of pulsing an ion beam using a simulation program in the laboratory of Duncan Weathers, associate professor of physics. The research was published in The Eagle Feather and presented at University Scholars Day, an event that celebrates the work of undergraduate researchers, including many Honors students. Bosca presented the results at the International Conference on the Application of Accelerators in Research and Industry in 2006.

He is now in the medical physics doctoral program at the University of Texas Health Science Center at Houston and hopes to teach and conduct research in a large academic hospital one day.

“Going to a major conference and giving an oral presentation when I was still an undergraduate was an enlightening experience and helped me see what I could actually do with a physics degree,” he says.

Blake Pankonien (’07) says conducting research on neuronal networks with Guenter Gross, UNT Regents Professor of biological sciences, set her apart from other students applying to Texas A&M University’s College of Veterinary Medicine. She received her veterinary degree in May 2011 and is part of a practice in Frisco.

“Dr. Gross taught my anatomy and physiology class, and was a crucial help with my thesis project,” she says. 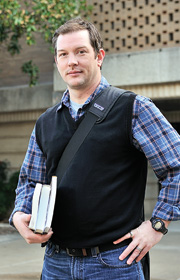 While many students are recruited for the Honors College in high school and enter as freshmen, the college accepts current UNT undergraduates until the middle of their junior year and has recruited current students who became high achievers early in their college careers.

Bosca says his academic record at Mansfield High School “wasn’t stellar.” The first in his family to attend college, he says he didn’t understand how to prepare for college in high school. But he received a letter about the Honors program after doing well academically his first semester at UNT.

Matthew Alexander (’11) originally entered UNT in 1993 but dropped out a year later. He returned in 2007 as a history major after working as a master electrician. He learned about the Honors College while pursuing information about scholarships.

Today, Alexander is preparing for a career as a tenure-track university faculty member. He received a five-year fellowship from SMU’s Clements Center for Southwest Studies last fall to pursue his doctoral degree.

“You have to seize opportunities when they’re offered to you,” says Alexander, who credits the Honors College for inspiring him to reach his academic potential. “That’s what took me from being a nontraditional student to a Ph.D. fellow.”