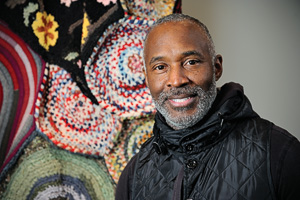 With UNT focused on offering the best educational experience for its students, the greater community benefits. Each semester, departments, schools and colleges — along with programs such as the Distinguished Lecture Series and the more than 100-year-old Fine Arts Series — bring world-renowned and socially relevant guest speakers and artists to the Dallas-Fort Worth area. Featuring national and world leaders, authors, artists and entrepreneurs, UNT lectures and performances engage audiences with new ideas and experiences. In the case of former UNT student and acclaimed visual and performance artist Nick Cave, students were engaged months before the performance ever began.

As artist-in-residence for UNT’s Institute for the Advancement of the Arts, Cave brought the community together in preparing for the performance piece “Heard.” His Soundsuits — wearable sculptures that make sounds when the materials brush together — have been lauded internationally, and selected Soundsuits from past performances were on display at UNT on the Square in downtown Denton.

Watch a video about Cave’s “Heard”

For “Heard,” newly created horse-like Soundsuits were made with the help of UNT art students and community members. Dance students — two for each of the horses — practiced performing in the suits while percussion students provided the score. The piece was performed in March on campus and April 1 in the Nasher Sculpture Center in Dallas.

Also visiting campus was syndicated advice columnist and activist Dan Savage, who discussed the It Gets Better Project. As the keynote speaker of UNT’s 12th Equity and Diversity Conference, he emphasized the importance of relaying positive messages aimed at lesbian, gay, bisexual and transgender teenagers in an attempt to prevent youth suicide.

Former punk musician Henry Rollins spoke in March as part of his worldwide spoken word tour, “The Long March.” The author, actor and former Black Flag frontman discussed his views on social and political observations and shared stories from more than 30 years touring the world. He has published a book of photos from his more recent trips to Bhutan, Cuba, Haiti, India, Sudan, Vietnam and Uganda. His lecture was part of UNT’s Fine Arts Series, which has provided intellectual and cultural opportunities to students since it originated as the Lyceum Series in 1903.

Author Wells Tower was the semester’s first speaker in the Visiting Writers Series, sponsored by the English department. After a question and answer session, he read from his short story collection Everything Ravaged, Everything Burned. His work has appeared in The New Yorker, Harper’s, GQ, Best American Short Stories, and elsewhere. He also has received two Pushcart Prizes. The Visiting Writers Series brings published authors to campus each semester to read from their work.