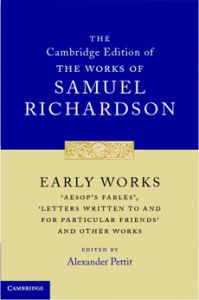 Alexander Pettit, professor of English, is editor of The Cambridge Edition of the Works of Samuel Richardson: Early Works, ‘Aesop’s Fables,’ Letters Written to and for Particular Friends’ and Other Works (Cambridge University Press) — the first scholarly edition of the earliest known writings of influential English author Samuel Richardson (1689-1761).

Richardson’s early work in religious controversialism, occasional verse and literary criticism, and his popular edition of “Aesop’s Fables” informs his later novels. Pettit’s introduction places the writings in the context of the author’s career and times, and he provides extensive explanatory notes on the texts and their treatment. Pettit also is the general editor for The Works of Tobias Smollett series (University of Georgia Press), which produced two volumes in 2011.