Learn more about the design

He says he was particularly inspired by a Mad Men episode in which a character refers to nostalgia as “a twinge in your heart far more powerful than memory alone.”

“When I planned my design, I wasn’t trying to create mid-century furniture,” Walsh explains. “I was borrowing elements to create something new and fresh with a sense of nostalgia.”

Walsh works as an intern at Interprise Design in Addison and for the North Texas chapter of the U.S. Green Building Council. 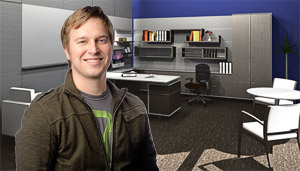