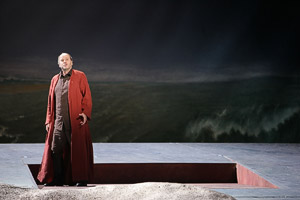 Opéra Royal in the Château de Versailles in France re-opened this fall with the voice of Richard Croft, professor of music and internationally renowned tenor. Croft sang Mozart arias at the opera hall, which originally opened in 1770 to celebrate the wedding of the future Louis XVI to Marie Antoinette and later served as home to the senate. It was closed in 2007 for repairs and refurbishing.

Croft’s performance occurred just before he began rehearsals at La Scala in Milan for Mozart’s Idomeneo, in which he sang the title role (right). Croft’s recording of Idomeneo with René Jacobs and the Freiburg Baroque Orchestra released on Harmonia Mundi in May has been named opera CD of the year by the German magazine Opernwelt.

A two-time Grammy nominee, Croft has served as a professor of voice at the College of Music since 2004. This season, he also takes on the role of Jupiter in a David McVicar production of Handel’s Semele at the Théâtre des Champs-Élysées in Paris and reprises Idomeneo as the centerpiece of the Mozarteum’s Mozartwoche in Salzburg.