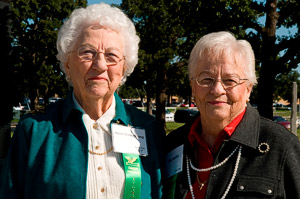 Earning more than 100 gold medals in track and field events for the Senior Olympics isn’t all Helen Denman Beauchamp (’41) can, literally, kick up her heels about.

A plucky 90-year-old grandmother of 11, she treasures photos of her offspring wearing T-shirts that read “Yellin’ for Helen — Go Granny Go,” and gives her medals to them for their own accomplishments. She says her sister, Olie Heflin (’48), is her biggest cheerleader.

Beauchamp ran track and played softball in high school. She began participating in the Senior Olympics in the early 1990s and today holds national and world records for women ages 85-89 in shot put, discus, javelin, long jump, high jump, triple jump and the hammer throw. She was inducted into the Mississippi Senior Olympics Hall of Fame in 2008.

A challenge seeker, she was reported in 1951 to be the first woman on record to kill a bear in Colorado. In her late 60s, she climbed Mount LeConte, the third highest peak in the Smoky Mountains.

“I believe in doing my best in everything I do, not just sports,” she says. “It’s my moral obligation and a key to life’s real meaning.”

She says she has “experienced great joy” in her lifelong work with the Primitive Baptist Church — June 2009 marked the 56th year of Harmony Hill Singing School, which she helped establish in Azle.

At North Texas, she was a health and physical education major and a Green Jacket. She says her professors, especially gym teacher Beulah Harriss, encouraged her to develop a solid foundation.

“They inspired me to study and know what that would do for me in all areas of my life,” she says.

“I was blessed to be born with a strong body and I’m trying to take care of it.” 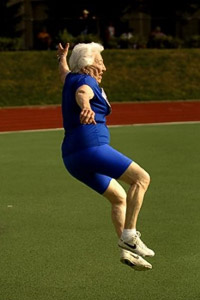