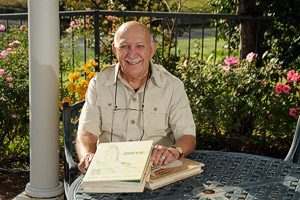 The year I graduated from North Texas — 1949 — was a great year. I was so proud I graduated that year, I kept phone numbers ending in the digits “1949” for 55 years. I was the first in the Lynch heritage to earn a college degree. (My younger brother, Ed Turney Lynch (’52), was the second.)

The enrollment in 1949 exceeded 5,200 students, with many returning veterans. That was the year I was a senior senator in our first student government, and the radio program I directed, “Campus Chat of the Air,” received outstanding awards.

As a salesmanship major, I enjoyed the wonderful reputation of the College of Business — but I worked more hours in the journalism building as a member of the Yucca yearbook staff. I had worked on yearbooks in high school, and as a college junior in 1947-48 I was the head “gopher.” I mounted and trimmed the student photos and became, by default, the photo scheduler.

Printing was done with hot type, on letterpress. I remember the young man showing me the press said, “Never put your fingers here,” and then smashed his finger when he forgot to move fast enough. He also showed me the effect of printers ink on your hands. I think I still have that ink in my system.

The returning veterans on the staff were “older men” and showed much more maturity than we juniors. They were on the G.I. Bill, which made them millionaires to me as well as war heroes.

The money I earned for working on the Yucca was a gift from God. It paid for my room rent and allowed me a little extra for food, gasoline, clothes and, of course, dating. I met Marilyn McGee (’50) when she was a sophomore at Texas Woman’s College and, with my great sales ability, talked her into transferring to North Texas in 1949. She was killed in a car accident on our honeymoon the next year.

After graduation, I put my North Texas degree to work selling yearbooks in Louisiana, which led to being hired in 1952 by Taylor Publishing Co. The company was serious about wanting to sell the North Texas yearbook. I succeeded in getting the contract for them, and was selling the Yucca when the last ones were published in the 1970s. What a thrill it was to work with the yearbook staffs for so many years.

The experiences I had at North Texas and my two years of selling in Louisiana gave me the insight I needed. Going from chief letter writer to national sales manager in my years with Taylor, I had the greatest job experiences a man could have, calling on schools in an era of strong educators who knew how young people thought and how to motivate them. I sold yearbooks in the North Texas area to universities and fire and police departments for four decades.

North Texas was so important to me and all the other students who worked hard for their degrees. I salute those brilliant young graduates of 1949, who became educators and business leaders of the ’70s, ’80s, ’90s, and maybe still today.

Eight women met at North Texas in 1980 -- and their bond is stronger than ever. Alumnus has gone from climbing at the Pohl Recreation Center to hiking the Appalachian Trail.