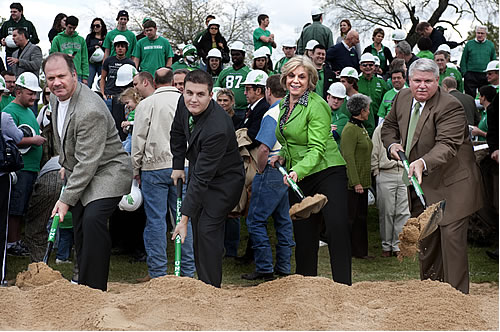 With Scrappy, cheerleaders and the pep band in full swing, proud Mean Green supporters like NFL Hall of Famer Joe Greene (’69) helped the university celebrate. And the ceremony emcee was George Dunham ('88), co-host of a top-rated sports radio show on KTCK-AM — "The Ticket" — in Dallas and the play-by-play announcer for the Mean Green Radio Network.

"It’s a great day for UNT," says Athletic Director Rick Villarreal. "This has been 9 years in the making. It is a great and historic moment for North Texas."

The multi-purpose facility, which will be under construction beginning in January, will feature increased tailgating space, luxury suites, a club level, a Spirit Store and a Touchdown Terrace.

The stadium will be the centerpiece of UNT's Mean Green Village. In addition to hosting UNT events, it will serve the entire region as a venue for outdoor concerts, community events, high school games and band competitions.

Support from alumni and community members is vital to the future stadium.

"I've waited for years to build a new stadium for the Mean Green," says Jordan Case (’81), chair of the volunteer committee raising private donations for the facility. "Thanks to the many donors who are making lead gifts and those who will join us in the coming months, our new stadium will be a spectacular demonstration of UNT’s commitment to first-rate athletics."

UNT President Gretchen M. Bataille and Villarreal led the platform party in the ceremonial groundbreaking. Following the ceremony, the crowd joined fans at Fouts Field to watch the Mean Green take on Army. The victims of the shooting at Fort Hood also were remembered, and first-responders to the tragedy were honored at midfield during the playing of the national anthem.