Get to know Chef Blythe Beck

She apprenticed at one of the most well-known restaurants in Dallas – the Mansion on Turtle Creek, she's executive chef at Dallas' popular Central 214 and stars in the Oxygen Network's The Naughty Kitchen with Chef Blythe Beck. But the UNT alumna says none of it would have happened, if not for a simple take out order.

How it all started

Blythe Beck says that, as an early college student at Xavier University in Cincinnati, she was lost. She dabbled in several disciplines, but couldn't find her passion.

Then one day, the self described former queen of take out, went to pick up an order at a Cincinnati eatery called the Cooker.

"When I got there, this woman came up to me and she said, ‘Are you Blythe Beck?' and I said, ‘I am!' and she said, ‘You have a great voice and you were really polite on the phone -- do you want a job?' And I said, ‘Absolutely not. No,'" Beck says. "And I was halfway out the door and then she said, ‘Well… it could be beer money.' And as a thirsty college student, that got my attention."

So Beck took the job greeting diners as they arrived.

"I started my career as a front door hostess and I fell in love with the restaurant business," she says. "I loved it, loved it. But I was always interested in what was going on in the back of the house, it seemed super fascinating to me."

During her next college break, Beck broke the news to her parents that she wanted a career in the restaurant business. After the shock wore off, her parents conceded to support her choice – with one condition.

"My dad said, ‘You have to get a degree because we get degrees in this family. If you can figure out a college where you can get a degree that will get you anywhere close to that, then that's fine.' So I left Xavier and eventually came to UNT."

As the hit series' final episode nears, the Houston native shares some of her favorite cooking stories and secrets, explains why she came to UNT and how UNT prepared her for the culinary world and for reality TV. 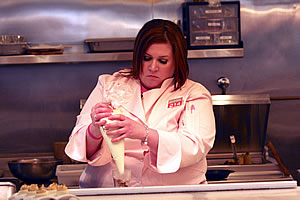 When you talk about naughty food, what do you mean?
I call my food naughty because it's made with butter and beer and cream and bacon fat -- but it's also made with love. I talk to my dishes.  I love on all my food because I think that when you love on it, you send that love out to the diner. So it's the naughty ingredients with lots of love. It's a positive energy. That's what I'm all about – pink positive energy!

Why pink?
Because it's a color of empowerment and it's feminine.  When I was coming up through the line, I had to wear black all the time, it was very boo. The minute I took over, I decorated everything pink, because it was a sign of being a woman and being a woman in charge. It was my signature.

What do you say to critics who think your naughty cooking isn't healthy?
When people talk about my food not being healthy, it's not meant to be eaten every day. It's not like you wake up every day and eat the chicken fried steak. I'm like America's dirty little secret, you know. You come to me to celebrate, you come here just to have an experience, a naughty experience, a naughty night, then go about your business. If you've had a bad day, come see me. If things are going great, come see me. If you feel like crap, come see me. I'll feed ya, I'll love on ya, you'll have a great time and you'll leave just a little bit naughtier.

What was the most difficult recipe or dish you've ever prepared?
My mother loves lobster and she came to visit me, and I had the biggest, fattest lobster I could find flown in for her. I called all of my chef friends because I didn't know how to cook it and still keep it tender. But every single chef had a different answer. One said to roast it, one said to boil it, steam it, tear it apart. But I didn't want to tear it apart, I wanted it to be whole. It was hard because it was so huge so you had to have the technique exactly right. I named him Pedro. He was delicious. My mom loved it.

Why did you choose to come to UNT?
I had applied to lots of schools but the very first acceptance letter I got was from UNT. I came for a visit and I was standing on Fry Street looking at the buildings, trying to decide what the hell I wanted to do. To the right of me was a guy with a 5-foot blue Mohawk. And to the left of me was a guy in cowboy boots and jeans and a cowboy hat. And I was, like, ‘I'm home!' and that was it. I knew that was exactly where I belonged and I loved it. I'm very proud of my school.

How did UNT and hospitality management help prepare you for your role as executive chef?
For one, I had the best class ever, the quantity class where you get to run the Club at College Inn restaurant [formerly Quantity Food Production and Management, now called Restaurant Operations II, operating in the Club at Gateway Center. I knew if there was anything to solidify how I felt, it was that class. Because the minute I was in charge of that kitchen, I knew that was where I belonged.  And UNT gave me that experience, without the option of failure. You worked there and figured out how things are, and saw if it was really what you wanted to do and that you could do it.

What is your best culinary success story?
Going from the University of North Texas to the Mansion on Turtle Creek to be the apprentice for Dean Fearing. I got that job during my last semester at UNT in 2001 when I was Dr. Richard Tas's teaching assistant. I was determined to go work for the best. When they came to recruit I had jet black and hot pink hair and they looked at my resume and they asked, "Why are you here?" and I said, "I'm the best UNT has to offer and you're the best the culinary world has to offer, I'll do anything, I'll peel potatoes, I'll peel shrimp. I'll wash your car, I'll wash your baby, whatever." And eventually Dean called me himself and hired me as his apprentice.

What lessons in the kitchen were the hardest to learn?
"Yes, chef." Was the hardest lesson that I had to learn. I always wanted to retort back, wanted to tell them how I wanted it. The humility of, you're the chef, and I'm just your minion, that was hard.

How did UNT and hospitality management help prepare you for your role as reality TV star?
UNT taught me how to buck up and survive in the thick of things. The Mansion on Turtle Creek was the hardest place in the world to work, I was very stressed out and I leaned on Dr. Tas for guidance and mentoring. UNT taught me perseverance, seeing something all the way through, and a great work ethic. I knew I was on a mission, I knew that if I just kept going, I could get there, and I learned that at UNT.

In The Naughty Kitchen with Chef Blythe Beck

How did you end up on TV and on your own show?
I was executive chef at Hector's on Henderson and it was my day off and I was called in to work. I didn't want to be there, I was being gripey, I wanted to be with my friends. And a TV producer came in, and everyone said, "oh, you should go talk to him." So I went to talk to him and we introduced ourselves, and he said something, and neither one of us can remember what it was, but I said, "Shut your face down!" and he said, "Oh my God, has anyone ever told you that you should be on TV?" That's how it started. We worked on the show for 3 years, and then thankfully Oxygen got it. And that's great because I heart Oxygen, they've been very good to me.

What surprised you most about being on a reality show?
The huge outpouring of people who are so fired up about my message and so fired up about what I am trying to do. That was the best surprise ever. You know, through Facebook and Twitter and things like that, I'm very accessible and people can interact with me. The best surprise was the fans' reaction which was mostly positive. It has been a humbling experience for me because I feel very honored when people come in to eat my food. Every day people have come from all over the country, just to come in and eat and to meet me. In one night we had people here from Kansas, Louisiana, New York City, Chicago, San Antonio, Houston. That, to me, makes it all worth it. All the negative reviews, all the people who try to hate on me, it's all worth it.

Why do you call Eric the sous chef "Monkey?"
Because I love monkeys and I love him, and it's a very affectionate name. He's sweet and wonderful and he's always by my side and that's why. He's my right-hand man.

Being an executive chef

How do you keep the picky and sometimes fickle Dallas crowd coming back to Central 214?
You give them amazing food at an excellent price and you treat them with respect and appreciate their business. It's not hard. You have to love on people and you have to say thank you for coming in. You have to respect that people can go anywhere they want and when they choose to come eat my food it's an honor.

Watch the last three episodes of The Naughty Kitchen with Chef Blythe Beck, Tuesdays at 9 p.m. on Oxygen