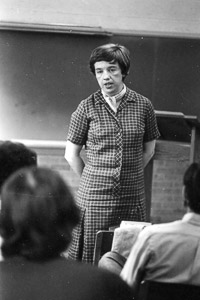 Now mainly retired, former journalism students came from all points in the country to celebrate Barbara Colegrove’s 80th birthday at the Ranchman Steakhouse in Ponder in June. Through the years, Colegrove has stayed in touch with her journalistic brood via phone calls and e-mails and by hosting get-togethers at least once a year at her home in Addison.

“This is not your ordinary retired professor,” said Allen Crenshaw, newly retired from teaching journalism at Carrollton High School. “We were a very close group in the journalism department, and Mrs. Colegrove has gone out of the way to keep us together.

“She was a very creative teacher who loved her students and made sure we stayed awake in class by staging news events like robberies, sit-ins and drug busts. She once set up a mock drug raid in class with her husband, Don, playing the part of a narc agent. After the action, Mrs. C would turn to us and say, ‘Now write that up.'"

Colegrove, who taught at UNT from 1961 to 1972, says teaching was different then.

“Back then, we were freer to improvise and keep the classroom lively — within limits, of course. I remember the class whistling when I took one of the boys up on a dare to wear a mini-skirt. I could hear Pop Shuford, our dean, out in the hall cracking his whip.”

At that particular time, an impressed student invited Mrs. C to sing with his band in a nightclub.

“I wish I remembered his name,” Colegrove said wistfully.

More than 66 friends, family members and former students were present at her birthday dinner in Ponder, where she was honored with speeches, gifts and a song, “The Ballad of Lester McBride” written by Bob Richman (’63), who lives in Atlanta.

Richman had been the ringleader for a prank pulled on his professor when she assigned reports in the History of Journalism class. The students invented McBride, a journalist who showed up in every report, traveling from newspaper to newspaper across the country.

“I wasn’t very attentive during the reports,” Colegrove confessed later. “By the time I caught on, Lester was way out west in Utah.” 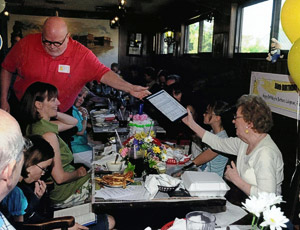 At the dinner, Mitch Land (’82 M.A.), director of the Mayborn Graduate School of Journalism, presented Colegrove with a booklet chronicling her time at the university. President Gretchen M. Bataille took the podium to welcome all the guests and to announce the elevation of the journalism department to the School of Journalism, which Land serves as interim dean.

Colegrove holds a master’s degree from Columbia University’s Graduate School of Journalism. She was designated an Honorary Alumnus of UNT in 2003 for her outstanding contributions and devotion to the university.

She endowed the university with a $100,000 fund for journalism majors in 1998. Appropriately, she and her late husband, Don, made the announcement by gathering UNT educators and journalism alums at a fete at the Ranchman, which was a journalism group hangout during the ’60s.

Now retired, she has kept her writing and editing skills sharpened by working over the years as a columnist for the Addison Register, serving as assistant editor for student news writers at Brookhaven College and proofreading copy for a weekly church newsletter. Her compiled newspaper columns contributed to a book recounting the history of Addison. She is a former Addison “Woman of the Year” and has served in the Addison Writer’s Group and the Addison Citizens Academy.

Mean Green mom loves seeing her daughter Dominique James ('19) on the field -- and in our pages.
Top