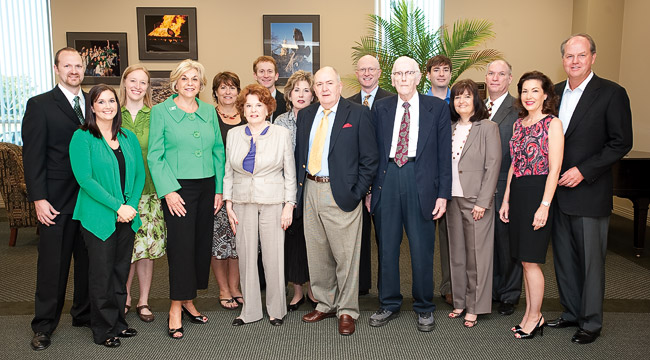 Members of the J.C. Matthews family were honored with the inaugural Generations of Excellence Award at the President’s Breakfast Sept. 26 during Family Weekend.

“We all have great pride and love for this university,” he said.

The legacy award recognizes families with many members who have attended or graduated from the university, who have demonstrated the value of family in their individual and collective lives, and who have provided extraordinary service to and advocacy for UNT.

J.C. Matthews began his life at North Texas as a student in 1920 and met his future wife, classmate Rena Mae Waggoner (’25). He became director of the Demonstration School and was the first dean of education and later vice president.

In 1952, he became the university’s eighth president and served 16 years, raising his three children in the President’s House. Matthews’ legacy includes overseeing North Texas’ peaceful racial desegregation and sustaining a passion for education in his children, grandchildren and great-grandchildren.

Members of the family who have attended North Texas include his grandson, Jim Laney (’79, ’82 M.Ed.), professor and assistant chair for initial certification in UNT’s Department of Teacher Education and Administration.