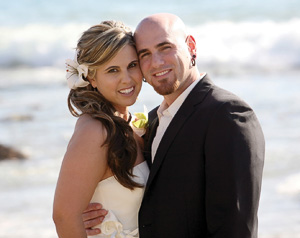 Just months out of high school, enjoying the boundless freedom that is synonymous with being a college freshman, I declared confidently to my roommate one evening that I was officially done with men. I had decided that relationships were far too complicated. And I reasoned that I was much too young for a committed relationship. My priority was going to be having fun. Ahem, I mean ... studying.

No less than 45 minutes later at the Delta Lodge, the independent fraternity in Denton, I met the man who I would end up marrying. Ah, the Delta Lodge. Home of some of Denton’s most notable foul-smelling, sweat-drenched, loud, cheap-hot-beer-drinking college parties.

The Delta Lodge was the kind of place my parents had emphatically advised me to avoid as it would surely be chock-full of unsavory characters. But I rationalized that my visit to the Delta Lodge was a cultural endeavor because I was going to enjoy live music.

It was 1991, and the heavy metal hair gods of the late ’80s were experimenting with new, exciting sounds. In a dark corner of the Delta Lodge was a band, and behind a curtain of thrashing hair, I saw him.

How would I explain this one to my parents? Not only had I gone to the very place they’d warned me about, but I had fallen instantly in love with a drummer.

And so began our 15-year courtship. He was a jazz studies major in the famed College of Music. I dutifully supported him by attending his concerts, encouraging him during lab band auditions and bringing him food during his marathon rehearsals.

And he in turn supported me as I worked toward a journalism degree. There was nothing more satisfying than finding him waiting for me outside of the General Academic Building after I’d spent countless hours in the computer lab, working on yet another project.

Despite all of the practicing and studying, we always found time for fun. Danny was in a popular band called Beef Jerky. I assumed my role of “band girlfriend,” which mind you, is a clear step above groupie.

Beef Jerky frequently played at Rick’s Place, a once-popular Fry Street anchor. Rick’s Place was to us what Cheers was to Norm — a place where everybody knew your name.

We eventually got a little apartment off Oak Street where we enjoyed the ease of walking to our classes and best of all walking to The Flying Tomato, our favorite pizza joint, where on more than one occasion we consumed our respective body weights in pizza.

A lot has changed since those days. For one, I can’t eat pizza like I used to without the consequence of seemingly instantaneous weight gain. But also, many of our old college haunts are gone. The old Delta Lodge, Rick’s Place and The Flying Tomato were all victims of fire.

As for me and my drummer boy, our love burns on. In fact, we married in Laguna Beach in 2007 with the Pacific Ocean at our backs.

And the beat goes on.