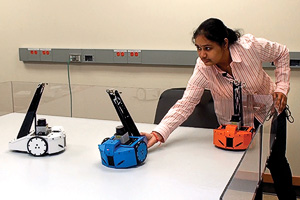 Engineering researchers in the Autonomous Systems Laboratory at Discovery Park are working to build a network of wireless sensors that would equip robots to communicate with each other, work that would help NASA collect unprecedented data on the moon, Mars and space.

The project is being funded by Phase One of the NASA Ralph Steckler Space Grant Colonization Research and Technology Development Opportunity. Eighteen universities nationwide received up to $70,000 for the project. Four universities will be chosen to receive up to $250,000 later this year for Phase Two.