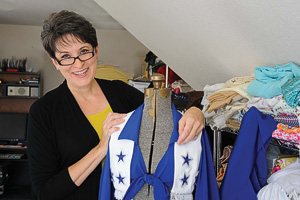 Since cutting out dresses for her Barbies as a girl, Lisa Dobson (’82) has patterned a career for herself.

Since cutting out dresses for her Barbie dolls as a girl, Lisa Dobson (’82) has patterned the most-likely career for herself. A graduate of UNT’s apparel design program, she has stitched her name into American history as the Dallas Cowboys Cheerleaders’ seamstress for the past six years.

Months before training camp starts, Dobson pulls out footage of the cheerleaders’ on-field performances and gathers her sewing tools to find ways to make the new season’s uniform more comfortable and eye-catching than the last. The major change in this year’s costume was to the balloon sleeves, which had limited the cheerleaders’ athletic performances.

“It’s really an honor,” Dobson says of sewing for the iconic group. “It’s such a great feeling to see the finished product on camera or on the field, but the best part is seeing the rookies wear the uniform for the first time.”

Less than a week after finishing the DCC uniforms, Dobson dives back into her home studio to work on other projects, such as sewing theatrical costumes for local dance companies.

Although Dobson was only 9 when she began creating on a sewing machine, she says her career sparked while attending UNT. She began at another university before making the switch.

“I was bored with academics and I just wanted to create,” she says. When she remembered that UNT had one of the few fashion design programs in the area, she decided to transfer.

She says she enjoyed the college experience and made lasting friendships. One friend was classmate and now fashion guru Michael Faircloth (’83), who recommended Dobson for the contract to sew for America’s most recognizable group of ladies.

“I will always be involved in fashion,” she says. “It’s a lot of work, but I love creating.”