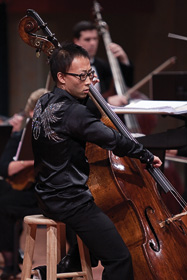 Twenty double bassists from around the world competed in the inaugural Bradetich Foundation International Double Bass Solo Competition at UNT in June.

Winning the top prize — $10,000 and a New York debut in Weill Recital Hall at Carnegie Hall — was Artem Chirkov of Russia. Namgyun Kim of Korea clinched the second-place prize of $5,000, and Rex Surany of New Jersey won the $2,500 third-place prize. All three earned CD recording and distribution, concerts and master classes throughout the U.S. and abroad, and four years of career development.

Tian Yang Liu, a UNT student from China, earned honorable mention and was named the favorite of the voting audience.