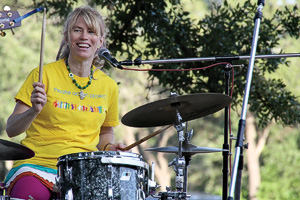 As Official State Musician for Texas, singer/songwriter Sara Hickman (’86) is promoting the arts for children.

Texas music icon Sara Hickman (’86) performs all over the country, with thousands of fans and newcomers hopping on the band wagon after every sold-out show. Even when she laughs, Hickman makes music. It’s no surprise she was named Texas’ Official State Musician of the Year for 2010-11, replacing last year’s honoree, Willie Nelson.

Her goal is to help raise $300,000 for Big Thought and Theatre Action Project, nonprofits that promote the arts among children. She also wants to encourage families to incorporate the arts into their lives.

“It is quite an honor,” Hickman says of her official state title. “Following Willie Nelson, I feel I am a part of history.”

The daughter of a fiber artist and painter, Hickman gained from her parents a sense of design, balance, texture, line, form and creativity. Her mother’s fiber pieces are on display in museums and private homes, and her dad taught painting at the University of Houston for 40 years.

When Hickman was 7, she swapped her piano teacher for guitar lessons with a church group. She says hand-picking her first guitar from a wall at a music store was like “getting married,” and she raced home from school every day to play songs she heard on the radio.

Although she has made a name for herself as a musician, Hickman was an art student at UNT. Before class, she and her friends could often be found at Jim’s Diner near campus with coffee mugs in their hands and art on their minds. She formed lasting relationships from those conversations and credits her career to professors like Richard Sale, Rob Erdle and Vernon Fisher, whose confident personalities inspired her.

Reminiscing about “Critique Day,” Hickman remembers presenting a painting from a series of dreams she’d had. She says the piece was colorful, but crazy. Once her presentation was over, Fisher said he would like it but he thought it was too feminine.

Disappointed by his remark, Hickman said, “Well, I can’t paint like you. I’m a woman, so I have to paint like me.”

The moment he pushed her to defend her art was life-changing, Hickman says.

“That was a great teaching moment that allowed me to take criticism but also find humor in it all,” she says. A few years later, she sold her dream paintings at the UNT gallery.

The best of times

Hickman has been a performing musician since her Houston high school days, performing at banks, psych units and weddings. She continues to follow her dream after signing with various major/indie labels, playing locally, nationally, for commercials (her latest is Popeye’s) and on television, from VH-1 shows to The Tonight Show. With tambourine in hand, Hickman even performed on a record by Cissy Houston, Whitney Houston’s mother. Of Hickman’s 20 albums — including four for children — her latest release, Absence of Blame, is the most benevolent: 13 songs about sorrow and redemption.

Although it’s not a requirement of the position, Hickman decided to use her title as Official State Musician of the Year to garner charitable funds. She has partnered with artists to remake more than 35 of her career hits to raise money to benefit Big Thought and Theatre Action Project and the children they serve. The Best of Times is being released in March, featuring musicians as various as Robert Earl Keen, Shawn Colvin, Brave Combo, Edie Brickell & The New Bohemians and Willie Nelson.

Hickman also has formed Family Time Rocks!, a band that performs interactive songs for kids at various state festivals and fairs. One of the band’s projects encourages bilingual children and their families to submit song ideas for an upcoming album, which will feature Hickman’s daughters, iolana, 10, and Lily, 14.

“Every time songs come in, I laugh, cry and get so thrilled about it,” Hickman says. “I really hope to help children continue to be expressive in the arts.”