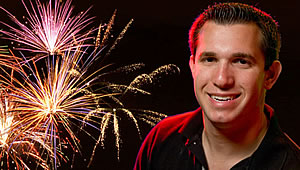 If you take in a fireworks show in Frisco, North Richland Hills, Little Elm, Mansfield or Rockwall during the July 4th weekend, there's a good chance you'll see the handiwork of UNT alumnus David Rosenbaum ('09).

Rosenbaum is CEO of Illumination Fireworks in Lewisville, a company he started as a sophomore at UNT in partnership with his father.

The business got a big boost in 2007 when Rosenbaum won first place in UNT's Murphy Center for Entrepreneurship's New Venture Creation Contest – which came with a $25,000 cash award.

"Winning the award gave me the money to help me grow the company a little faster than I expected," he says. "From day one, we've decided not to spend more than we're making and not to get into debt. We used the prize money to purchase some additional equipment that we weren't expecting to be able to buy early on."

Born into a multi-generational family of entrepreneurs, Rosenbaum has business in his blood. His business venture was triggered by something he and his father started doing together when Rosenbaum was a child.

As he was growing up, his father used to take him out into the country to shoot fireworks for July 4 and to ring in each New Year.

"When I was 16, we worked for a retail fireworks stand, got involved in the business, networked with people in the industry and got invited to help on some of the large professional shows," Rosenbaum says about his earliest experiences in professional pyrotechnics.

"After several years of learning the industry, my father and I decided to start our own business. We found ways to improve logistics and created a market for more affordable shows for smaller events."

This year, the business has grown by 75 percent and by December he says he hopes to see 100 percent growth over last year.

"The best thing we did was to invest in the necessary equipment to produce large and elaborate displays," he says. "It was very costly, but has proven to be worth it. We've continued to grow despite the challenging economy. The only change we see is the smaller events starting to slow down a bit, but overall we're growing because we're doing a lot of larger celebrations now.

"We always try to stay ahead of the competition by being innovative - something I learned at UNT," Rosenbaum says. "By having unique effects in our choreographed shows, we're able to ‘wow' audiences at an affordable cost to our clients."

Rosenbaum enrolled at UNT because it's close to home (he's from Lewisville) and because he's always liked the Dallas-Fort Worth region. He first chose to major in economics because he found it interesting, but later shifted to a general business major.

"But as I finished my junior year, I was having a really hard time balancing school and work," he says about the reason he changed his major a third time. "The applied arts and sciences degree let me finish my coursework online and graduate on time while growing my business."

The flexible degree options weren't the most valuable part of his UNT education, though he says the experience as well as his coursework did teach him the importance of flexibility.

"At UNT I learned you have to be able to adapt quickly," he says. "You can spend weeks writing a business plan, and the day you finish it, you may realize you need to change direction. You have to follow and anticipate the demands of your market."

But most importantly, he says he's glad that he loves what he does. And watching audiences enjoy the show is what he loves most about his work.

"I love entertaining crowds," he says. "When I can show people an effect or style show that they've never seen before, that's what really makes me feel great. There's nothing like hearing tens of thousands of people cheering and clapping after you've spent months planning."