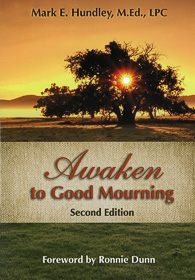 Hundley is directing part of the proceeds from "Awaken to Good Mourning" to an ambitious new project he has planned — Every Step Has a Story.

Mark Hundley (’93 M.Ed.) and his daughter, Kacie, spent a lot of time at UNT when she was little. They explored the campus while his wife, high school teacher Christy Laseter Hundley (’78), took classes for her master’s degree in secondary education.

Their lives changed in 1989 when Christy, within a few courses of completing her master’s, was killed in a car wreck on her way to work. Hundley and 7-year-old Kacie were left to learn how to cope without her.

Hundley, who was working for a public utility at the time, decided to enroll at UNT.

“I asked myself, ‘What am I going to do with my life?’ So at 35, I went back to school to get my teaching certification and then my master’s in counseling,” he says. “At the beginning, I was taking classes with students much younger than I was. I remember almost staying home that first day, I was so scared.”

Looking for ways to work through his grief constructively, he set up a scholarship at UNT in Christy’s name for future teachers.

“On the morning of Christy’s funeral, I ended up speaking to the students at the high school where she taught,” he says. “I told them the things that were important to her: her faith, her belief in education and her family. I told them she would want to say, ‘Pursue as much as you can for the rest of your life.’”

He ran the White Rock Marathon to help raise funds to endow the scholarship. Then he ran it a second time.

And when he discovered that helpful resources for dealing with loss weren’t easy to find, Hundley wrote his own guide based on his experience. The second edition of Awaken to Good Mourning (P3 Press), with strategies for navigating the phases of grief and identifying sources of support, was released this year.

Hundley is directing part of the proceeds from the book to an ambitious new project he has planned — Every Step Has a Story. It’s a road trip, of sorts.

From April 1 to 30 next year, he’ll walk more than 670 miles, roughly a million steps, from McKinney to Nashville, Tenn., stopping along the way to raise awareness of childhood and adolescent grief and resources and to raise funds for the Journey of Hope Grief Support Center in Plano. A licensed professional counselor since 1994, Hundley co-founded the nonprofit center in 1998 to provide free grief support for children, adolescents and their families.

“I remember what it was like to have a 7-year-old daughter going through that,” he says. “My therapist taught me how to be a support person for her, and seeing the need, I wanted to expand that support.”

Hundley, who calls the walk to Nashville “a stupid, crazy old idea” that kept coming back, is in training now. His goal is to raise $1 million for a stand-alone facility for the center, which now has office space at Medical Center Plano and meets in various churches. He says the center has helped people from 11 counties and 50 different communities and offers internships for future counselors.

For his walk to Nashville, Hundley will average 26 miles each day and rest on Sundays. The route will take him through Little Rock and Memphis and smaller towns in between, where he plans town-hall meetings to share his story and gather stories from others who have dealt with grief.

“I expect there will be people who want to walk with me along the way,” he says, “just to be part of something bigger than themselves.”

Hundley thought having a film crew to document the trip would help spread awareness of the issues, so he took to his Twitter account and “within 20 minutes, it was basically set up.” He also has a public relations company ready to help and a few corporate sponsors lined up. He hopes to have a bus to serve as a rolling headquarters and a website to provide live streaming video.

“Grief isn’t talked about much,” he says. “It’s sometimes labeled ‘depression,’ ‘stress,’ or maybe ‘relational issues.’ I want to make talking about the issue more common.”

UNT remains important to the Hundley family. A member of the UNT Counselor Advisory Council, Hundley is now married to Vanessa Moore-Hundley (’90, ’91 M.Ed., ’93 M.Ed.), whom he met in the counseling program at UNT. And daughter Kacie (’03) returned to campus as a student herself.

“When Christy died, Kacie said, ‘All that going to school for nothing,’” Hundley says. “But on the day that would have been Christy’s graduation day, UNT awarded her degree posthumously. Kacie decided then that education is important. She went on to earn her own teaching degree at UNT.”

Hundley is looking forward to his million-step walk and says everyone’s been supportive — after the initial shock — with offers of help. And what would Christy think?

“I’m sure she would say, ‘Are you crazy or what?’” he says. “But I know somewhere she’s aware of this, and she’s proud.”

Follow Hundley on Twitter, or read his blog for the latest on the Every Step Has a Story project.