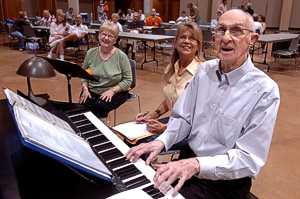 After serving in the U.S. Army Signal Corps during the war, Rogers completed his bachelor’s degree in piano at the Juilliard School. He continued to New York University and to Columbia, where he finished his master’s.

“Two months after I got my master’s degree, I was working here in Denton at North Texas,” he says.

Rogers taught piano pedagogy from 1948 to 1984. As assistant to the music dean, he chaired the committee to remodel the Music Building on Chestnut Street and Avenue C.

In addition, Rogers was a charter member, province governor and chapter advisor for the music fraternity Phi Mu Alpha. He supports three music scholarships, including a national service award for Phi Mu Alpha members that carries his name.

Currently, Rogers busies himself playing piano at fundraisers around Denton and at UNT events. He also volunteers at the Music Library with his wife, Daisy, working with the sheet music collections from radio stations WBAP and WFAA.

“What I’m doing now is what I’m really thrilled with,” he says of transcribing the music into the library system for use by UNT students and faculty.

Rogers says one of the greatest rewards of teaching was “being a teacher of many, many outstanding students who are now working everywhere.”